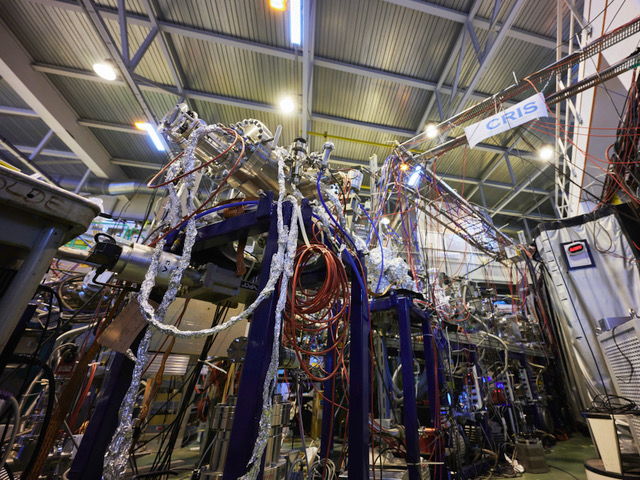 An international team of experimentalists and theorists working at CERN’s nuclear-physics facility ISOLDE have succeeded in performing the first ever laser-spectroscopy measurements of a short-lived radioactive molecule, radium monofluoride.

Laser spectroscopy refers to the process of shining laser light on molecules to reveal their energy structure. It isa standard approach used by physicists. Until now, however, researchers hadn’t been able to use the technique to study short-lived radioactive molecules, which contain one or more unstable nuclei. The University of Manchester has led the development of these techniques, improving the sensitivity sufficiently to enable these measurements to be made.

Compared to atoms, such molecules offer a superior means to explore fundamental symmetries of nature and to search for new physics phenomena. The results, published today in the journal Nature, represent a pivotal step towards using these molecules for fundamental physics research and beyond.

“Our measurements demonstrate that radium monofluoride molecules can be chilled down to temperatures that would allow researchers to investigate them in extraordinary detail,” says principal investigator Ronald Garcia Ruiz. “Our results pave the way to high-precision studies of short-lived radioactive molecules, which offer a new and unique laboratory for research in fundamental physics and other fields.”

STFC-funded, Ernest Rutherford Fellow Professor Kieran Flanaganfrom The University of Manchester said: “There is a tremendous opportunity to use radioactive molecules to search for new physics and help provide answers to fundamental questions in the fields of nuclear and particle physics.”

Radium monofluoride molecules are particularly interesting because they contain radium, some isotopes of which have nuclei shaped like a pear, with more mass at one end than the other. These exotic pear shapes amplify processes that break fundamental symmetries of nature and could reveal new physics phenomena beyond the Standard Model.

Scientists believe the new findings could help demonstrate processes that break time-reversal symmetry – particles that vary if you swap forwards in time for backwards – which would give particles an electric dipole moment. This can be thought of as a shift of the cloud of virtual particles that surround every elementary particle away from the centre of mass.

The current experiment builds on theoretical investigations of the energy structure of radium monofluoride. Based on these investigations it was predicted that the molecule is amenable to laser

cooling, whereby lasers are used to cool down atoms or molecules for high-precision studies. “This laser-spectroscopy study of radium monofluoride at ISOLDE provides strong evidence that the molecules can indeed be laser cooled,” says ISOLDE spokesperson Gerda Neyens.

The international collaborative team produced radioactive radium isotopes by firing protons from the CERN’s Proton Synchrotron Booster on a uranium carbide target, radium monoﬂuoride ions were then formed by surrounding the target with carbon tetrafluoride gas.

The radium monofluoride ions were then sent through ISOLDE’s Collinear Resonance Ionisation Spectroscopy (CRIS) setup, where the ions were turned into neutral molecules that were subsequently subjected to a laser beam that boosted them to excited energy states at specific laser frequencies. A subset of these excited molecules was then ionised with a second laser beam and deﬂected onto a particle detector for analysis.

By analysing the measured spectra of ionised excited molecules, the team was able to identify the low-lying energy levels of the molecules and some of the properties that demonstrate that that the molecules can be laser cooled for future precision studies.

In addition to their potential in exploring fundamental symmetries, molecules made of short-lived isotopes can be highly abundant in space, for example in supernovae remnants or in the gas ejected from mergers of neutron stars.

The project was part- funded by the Science and Technology Facilities Council (STFC).