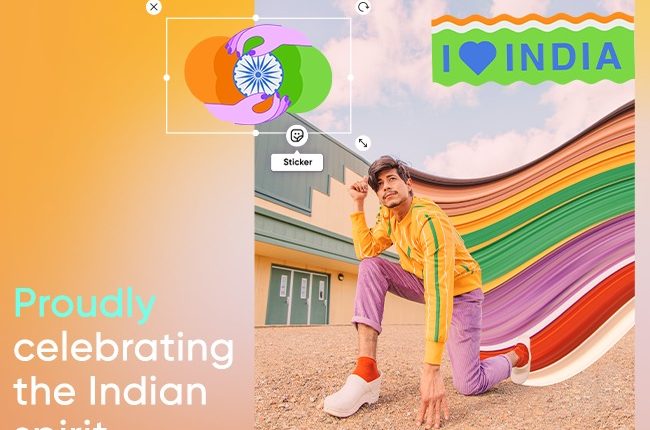 New Delhi : Picsart, the world’s leading creative platform celebrates Indian Independence and language diversity by adding two more regional languages to the earlier existing two, Hindi and Bengali. With this, the app covers the major languages of the regions in India.

Independence Day celebrates the sacrifices of the freedom fighters who fought the colonial occupation to give India Independence. Since independence, India has been a democratic and diverse nation striving towards further greatness and prosperity. Picsart with its India-centric features aims to give the country’s millennial population an opportunity to express this diversity in the most creative way possible.

School of Planning and Architecture and ISSDA sign MoU to…

Taxes on fuel being subsumed into GST will have to be…

To make Independence Day extra special, Picsart has also further introduced four new Indian text fonts, Indian music, and exciting stickers and replays that will allow users to create special content to portray their love for India. Picsart seeks to empower Indians to express themselves to create content using the special range of filters, replays, stickers and fonts available in the app.

“75th Independence Day is both special and emotional for all Indians. It reminds us of the sacrifices many made to get us here. Picsart is proud to be a part of the celebration and celebrates it by introducing two new languages Marathi and Tamil in the app alongside the existing languages of Hindi and Bengali. In doing so, Picsart aims to reach the local communities to help encourage them to create content in major Indian languages and share with the world”, said Ravish Jain, Country head at Picsart, India.

Picsart is free to download for Apple, Android, and Windows and can also be accessed on the web. Picsart Gold is available on a monthly or annual subscription basis for those wishing to enjoy premium editing. With Picsart Gold, subscribers have access to millions of stickers, hundreds of fonts, frames, and backgrounds, and an entire library of free-to-edit content and stock photography.

Meghalaya wins the ‘Best Performer’ award in the National Startup…