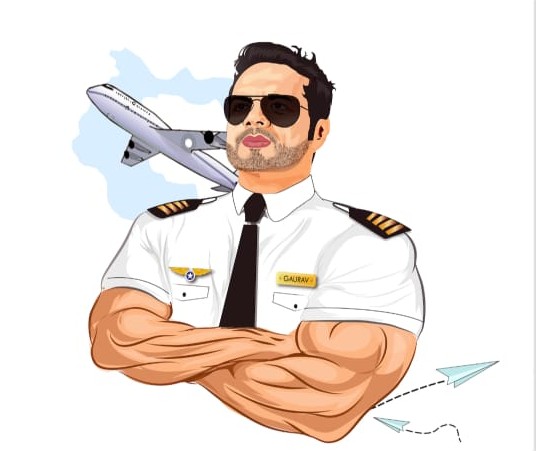 New Delhi: India’s foremost fitness and Lifestyle YouTuber Gaurav Taneja aka. Flying Beast’s fandom has marked new heights. The 34-year old YouTuber smashed the world’s most prominent video streaming and sharing a platform with a major blow by the launch of his new channel “Rashbhari ke Papa” on the occasion of his birthday this year, 9th July.

The pilot by profession, Gaurav Taneja’s new gaming channel set the world record of garnering the swiftest hundred thousand subscribers in just ninety-eight minutes. The Flying Beast’s fame and ascendancy over the platform with the launch of the new gaming channel came along with the creation of more than eighty-two fake channels within the twelve hours after the real one went live, setting up another record.

“The determined YouTuber has a jovial and tender personality; these elements delight the audience and has paved his way to such a huge fan base. Lately, he was awarded with the golden button by YouTube and had been a show-stealer at several YouTube fan fests.

The newly launched channel has been named after his two-year-old daughter Rasbhari (Kaira) Taneja, the channel is solely dedicated to his love for gaming and is continuously gathering the support from its viewers, making it one of the fastest-growing channel at present.” briefed by Ritu Rathee, Gaurav’s wife.

He commenced his YouTube journey with his Health and Fitness channel “Fit Muscle TV” dated back in November 2016. After the success of his foregoing channel, another vlog channel “Flying Beast” was introduced that showcased his daily routine to manage his passion and profession simultaneously. He is IIT Alumni, a certified nutritionist, a professional bodybuilder, and a Pilot. The well-rounded beast is consistently admired for delivering quality content over his channels for the last four years.

“This channel is solely dedicated to gaming and to interact with my fans for all the love and support they share, it has become the fastest-growing channel and crossed the 1 million followers within four days, breaking the preceding record of Rawalpindi express aka. Shoaib Akhtar for reaching this mark in 28 days. What better birthday gift should I have asked? I am very obliged to my audience. Thanks for always being there for me.” Said, Gaurav Taneja

Ritu added, “He is a fitness freak and has won many bodybuilding competitions. He does not compromise with his healthy diet. He continues to be grateful to the entire YouTube family for pouring so much support and love and will do his best to provide fresh and original content.”

Apart from vlogging and gaming, his dedication and hard work have helped him inspire millions of people around the globe to follow a healthy lifestyle and has made him appear as an exemplary idol for the youth.

Notebook announces the appointment of Maj. Gen. Neeraj Bali, Sena medal (Retd.) on its board of advisors