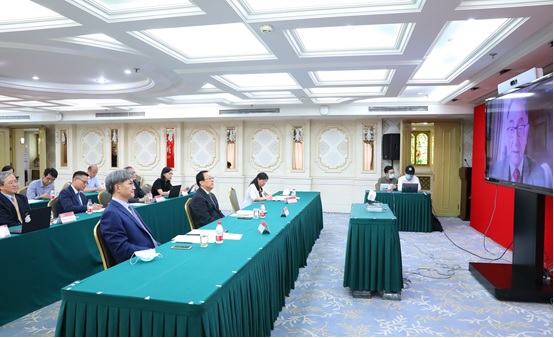 Peking University has thrown its weight behind the fight against COVID-19, not only stepping up efforts in education but also participating in the global anti-pandemic effort. As Hao noted, global cooperation is especially important to this regard. Both the Royal Academy of Engineering and the University of Strathclyde boast a wealth of academic resources and strong research capacity. There is huge potential for collaboration between PKU and the two institutions across a variety of professional fields. PKU hopes to establish an academic partnership with the two institutions, and jointly contribute to China-UK engagement in the areas of humanities and education in the post-pandemic era.

MacDonald shared on contributions made by the Royal Academy of Engineering and the University of Strathclyde in Britain’s battle against COVID-19, and expressed willingness and anticipation regarding further collaboration with PKU.

As part of the conference, faculty members from PKU also hosted discussions on a variety of fields with the British side.