Platypus should be listed as a threatened species: new report

A landmark assessment by scientists at UNSW Sydney recommends the platypus be listed as a threatened species under Australia’s and NSW environmental legislation.

The UNSW researchers, along with the Australian Conservation Foundation, WWF-Australia and Humane Society International Australia, today submitted their recommendations to the Commonwealth and NSW Government’s scientific committees.

The International Union for Conservation of Nature (IUCN) Red List currently lists the iconic species as ‘Near Threatened’ – but it is not listed as threatened under Australia’s Environment Protection and Biodiversity Conservation (EPBC) Act.

For their assessment, a team of researchers from the Centre for Ecosystem Science (CES) at UNSW collated all available data and evidence and assessed the species’ risk of extinction against IUCN and EPBC criteria.

The scientists find that the area of eastern Australia where platypuses are found has shrunk by up to 22 per cent, or about 200,000 km2, over the past 30 years.

“We recorded the most severe declines in platypus observations in NSW – particularly in the Murray-Darling Basin, where natural river systems and water flows have been the most heavily modified,” says UNSW’s Dr Tahneal Hawke, a lead author of the report.

In NSW, the number of platypus observations declined by around 32 per cent in the last 30 years, compared to 27 per cent in Queensland. In Victoria, even though the state-wide decline was around 7 per cent, the researchers observed reductions in numbers of as much as 54-65 per cent in some urban catchments near Melbourne.

The scientists’ models predict that platypus populations may have declined by more than 50 per cent as a result of historic land clearing, river regulation, and extreme droughts – some of the major threats affecting the species. Platypuses also drown in closed freshwater yabby traps, which are still legally sold in NSW and Queensland.

“The platypus continues to face ongoing threats across its range. Unsustainable water extraction and land clearing will continue to put pressure on freshwater ecosystems and drive future declines in the future,” says UNSW’s Dr Gilad Bino, a lead author. 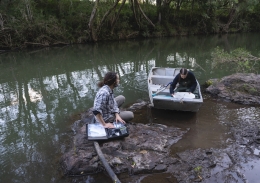 Listing the platypus as threatened would increase the scrutiny placed on developments that might endanger the species and prioritise its monitoring.

“It would also mean an increased focus on what we can do to improve the situation,” Professor Kingsford, CES Director, says.

The scientists say protecting one of the world’s most iconic animals and the rivers it relies on must be a national priority.

“We have a national and international responsibility to look after this unique animal and the signs are not good. Platypus are declining and we need to do something about threats to the species before it is too late,” Prof. Kingsford says.

The UNSW report, available online, was funded through a research grant from the Australian Conservation Foundation (ACF) in collaboration with WWF-Australia and Humane Society International (HSI).