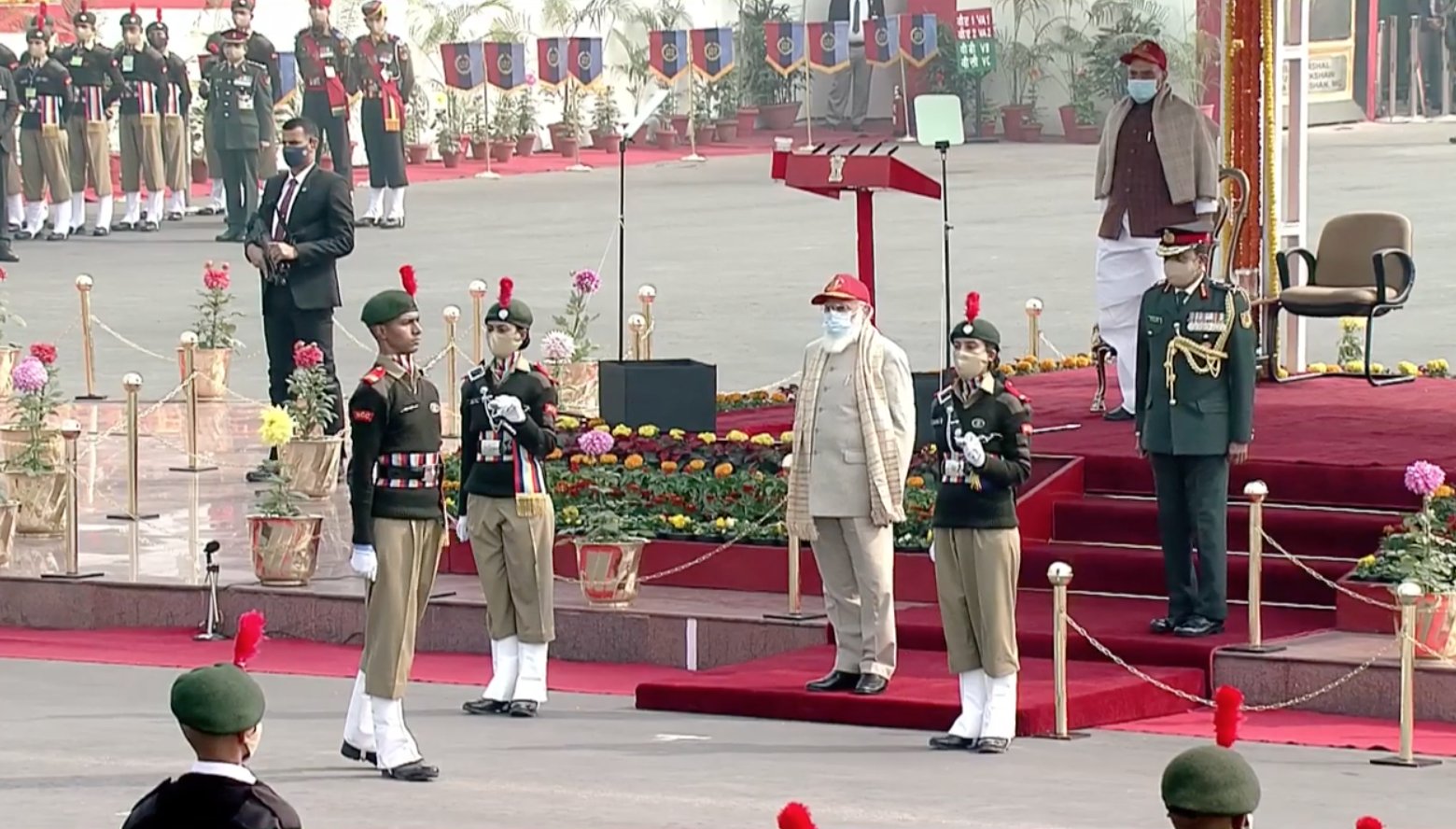 New Delhi: The Prime Minister, Shri Narendra Modi addressed the rally of the National Cadet Corps (NCC) at Cariappa Ground in Delhi today. Union Defence Minister, Chief of Defence Staff and the three armed services Chiefs were present on the occasion. The Prime Minister inspected the Guard of Honour, reviewed the March Past by NCC contingents, and witnessed cultural performance during the event.

Speaking on the occasion, the Prime Minister said that nations with strong presence of discipline in Social life, thrive in all fields. He said NCC has major role to play in instilling this sense of discipline in the social life of India. The Prime Minister said that as the largest uniformed youth organization, NCC is gaining in stature day by day. NCC cadets are present everywhere where Indian tradition of valour and serviceis being promoted or awareness about the constitution is being generated. Similarly, any project involving environment or water conservation has NCC participation. The Prime Minister praised NCC cadets for their contribution during calamities like Corona.

The Prime Minister said that it is incumbent on all the citizens to fulfil the duties enshrined in our Constitution. Whenever this is followed by citizens and civil society, many challenges can be met with success. Shri Modi said that it was this blend of sense of duty among the citizenry and bravery of the security forces that broke the back of naxalism and Maoism which was affecting a large part of our country. Now menace of Naxalism has been shrunk to a very limited area of the country and affected youths have left the path of violence to join the development mainstream.

The Prime Minister said that Corona period was challenging but it brought the opportunities for extraordinary work for the country, improve the country’s capabilities, making it Aatmnirbhar and to go from ordinary to the best. Youth has a key role in this, said the Prime Minister.

The Prime Minister, laid out the plans for expansion of NCC in border and coastal areas and recalled his 15th August speech where he announced new role for NCC in 175 such districts. He informed that about 1 lakh cadets are being trained by Army, Air force and Navy for this. One third of them are girl cadets. Training infrastructure for NCC is being strengthened. As against just one firing simulator earlier, 98 are being established now. Micro flight simulators are also being increased from 5 to 44 and rowing simulators from 11 to 60.

The Prime Minister paid tribute to Field Marshal Kariappa on his jayanti today and noted that today’s venue is named after him. He said new opportunities for girl cadets are emerging in the armed forces. He noted with satisfaction that in recent times, there has been an increase of 35 percent in the number of girl cadets in NCC. The Prime Minister also paid tribute to the armed forces on 50 years of the victory in Bangladesh War of 1971. The Prime Minister also asked the cadets to visit the National War Memorial and also asked them to get associated with the revamped gallantry award portal. He also noted the NCC digital platform which is fast emerging as the platform for sharing of ideas.

Talking about the anniversaries, the Prime Minister pointed out that this year India is entering 75th year of independence, 125th birth anniversary of Netaji, Subhas Chandra Bose. He asked the cadets to seek inspiration from the glorious example of Netaji. Shri Modi also asked the cadets to be aware of next 25-26 years when India reaches 100 years of its independence.

The Prime Minister, elaborated India’s capabilities of meeting the virus challenge as well challenges of the country’s defence. He asserted that the country has the one of the best war machine in the world. He mentioned that recent mid-air refueling of new Rafale Aircrafts with the help of UAE, Saudi Arabia and Greece reflect the strengthening of ties with Gulf countries. Similarly, India has decided to manufacture more than 100 defence related equipment in India. This and Air Force’s order of 80 Tejas fighter planes, enhanced focus on artificial Intelligence related warfare will ensure that India emerges as major producer rather than a market of defence equipment.

The Prime Minister exhorted the cadets to go vocal-for-local. He mentioned makeover of Khadi as a trendy brand among youth and emphasis on local in fashion, weddings, festival and other areas. He said self-confident youth is important for self-reliant India. For this the government is working in the field of fitness, education and skill. New momentum can be seen this regard from Atal Tinkering labs, to modern education institutes to skill India and Mudra schemes. The Prime Minister said Fitness and sports are being given unprecedented push through Fit-India and Khelo India movements including special programs in NCC. The Prime Minister also informed that the New National Education Policy is making the entire system student-centric by bringing in flexibility to choose subject as per needs and interest. Country will progress as the youth will take advantage of the opportunities provided by the reforms, said the Prime Minister.