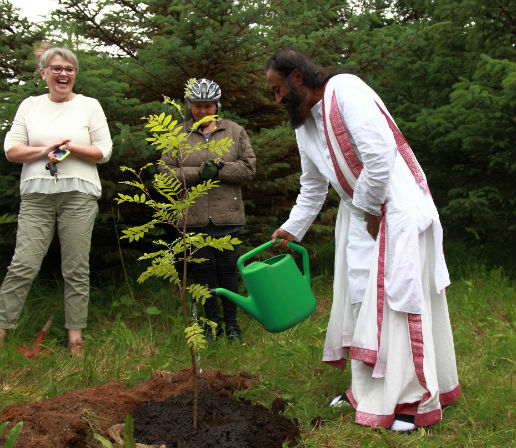 A series of public interactions in Casablanca and Rejkjavik saw packed halls taking part in discourses, music and meditation with Sri Sri.

Ukraine: EU humanitarian operation in the Republic of…

During his maiden 3-day trip to Iceland, Gurudev Sri Sri Ravi Shankar met with the Prime Minister of Iceland, His Excellency, Bjarni Benediktsson, on 25th July. Benediktsson, describing the meeting as being very pleasant, took to Twitter to share that they enjoyed discussing how to bring more peace and happiness to the world.

During his visit to the kingdom of Morocco from 26th to 31st July, Gurudev met top leaders from Morocco and UAE, addressed leading business men at the International Leadership Symposium and interacted with prominent faith leaders in Casablanca.

At the interfaith meet organised at Roman Catholic Church, Casablanca and titled ‘Wisdom at the Service of Peace’ Gurudev held conversations with leaders of diverse faiths including Dr. Faouzi Skalli, Sufi leader and founder of the Festival of Sufism.

The public programs in Casablanca saw turnouts of a large number of people to take part in sacred Indian and Moroccan musical performances and guided meditation by Gurudev.

Ukraine: EU humanitarian operation in the Republic of Moldova enhances assistance for…

Skill India gives a boost to entrepreneurship in Jharkhand