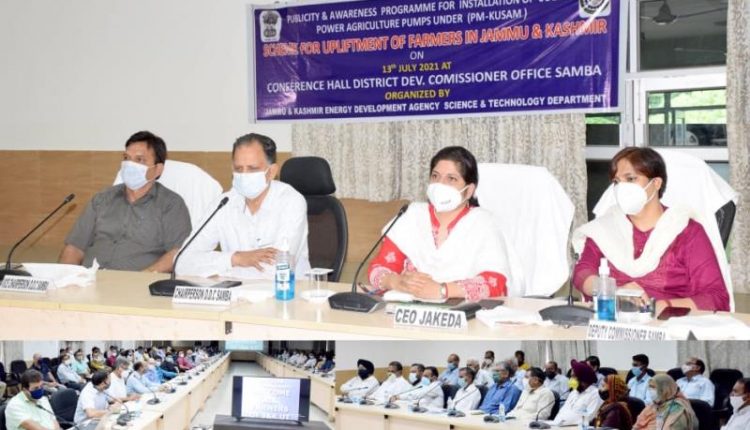 Speaking on the occasion, the CEO JAKEDA said that the Solar backed irrigation mechanism being introduced under the PM-KUSUM scheme is bound to transform the agriculture sector and also enhance the livelihoods of small to marginal farmers.

The scheme provides for 50% subsidy from the Central Government, 30% from Government of J&K and only 20% as farmers share with a 05 year warranty.

While addressing the participants, the Deputy Commissioner Samba exhorted upon DDCs BDCs, PRIs and district officers to sensitize the farmers about the scheme and encourage them to reap maximum benefits. She said the changing rainfall patterns have added to farmers’ woes and It is thus critical to look into ways to enhance agricultural production by increasing cropping intensity and employing effective irrigation techniques. “For the first time, farmers can have control over water and electricity supply through solar water pumps (SWP), this new cost efficient technology is bound to empower farmers” added DC samba. The DC also said that PM-KUSUM is a major step towards having Green irrigation.

Later, an interactive session was also held in which various technical and non technical queries raised by PRIs, farmers were addressed by technical experts of JAKEDA.