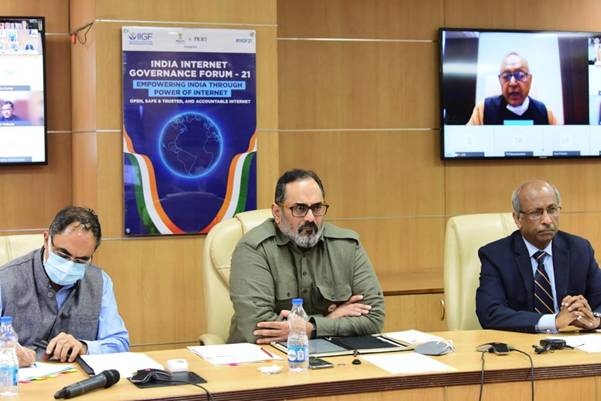 New Delhi: Highlighting multistakeholderism on the internet as an article of faith for the Narendra Modi Government , Rajeev Chandrasekhar, MoS, MeitY today said there is a need to make internet open, safe & trusted and accountable for all under the Digital India Mission. He was speaking during a high-level session on the final day of first ever India Internet Governance Forum (IIGF) – a 3-day online event on internet governance, jointly organized by the Ministry of Electronics and Information Technology (MeitY) and the National Internet Exchange of India (NIXI). It was also graced by the presence of eminent dignitaries and luminaries such as Maarten Botterman (ICANN Board Chairman), Ajay Sawhney (Secretary, MeitY, GoI), Anil Jain (CEO,NIXI), BK Syngal, Anriette Esterhyusen (Chair, MAG IGF) and Navika Kumar (Group Editor, Times Network & Editor-in-Chief, Times Network Navbharat). PM Narendra Modi with his message also congratulated IIGF’s efforts towards defining roadmap on internet governance. A report titled “Building an inclusive Digital Society for Rural India” by ICRIER/BIF was also released during the event.

Sharing his thoughts during the event, Rajeev Chandrasekhar, MoS, MeitY said,” India is becoming one of the largest connected nations with 800 million people online and with the world’s largest rural broadband program, we would soon have more than 1 billion Indians on the internet. In 2015, the Prime Minister Narendra Modi launched the Digital India Mission with 3 major outcomes― to transform lives of Indians, expand economic opportunities with digital entrepreneurship, and enhance strategic capabilities in certain technologies including the internet so that the future of internet is shepherded by countries that are open societies and share the same set of democratic values & respect citizen rights. India strictly supports multistakeholderism which is an article of faith for the Narendra Modi Government and the IIGF is all about bringing multi-stakeholders across the table for an open, safe & trusted and accountable internet.”

“India is now a significant part of the global internet ecosystem. We already have 800 million Indians online and there is a challenge of connecting 400 million people more. We need to go there with a meaningful broadband network that provides immense opportunities and contributes to the global market and also back to society. It is also important that the entire internet governance is focused on the goal of making the internet open, safe & trusted and accountable for all. India strongly supports multistakeholderism,” echoed Ajay Prakash Sawnhey, Secretary, MeitY.

The 3-day online event was centred around the theme “Empowering India through Power of Internet” and brought stakeholders of internet governance together to discuss the roadmap for digitization and reaffirm India as an essential participant globally.

HCL Foundation in Partnership with the Govt. of UP Launches…

Bihar has shown tremendous growth and Initiatives on IT…

The event that was held between 25-27 November, also highlighted the role and importance of digitization in the international policy development on internet governance. Maarten Botterman, ICANN Board Chairman said, “We need to make sure that the internet works for the citizens and is safe like any other public space. The pandemic has taught us how crucial the internet is and it has been able to serve people in an incredible way. We also have to make sure that technical aspects of internet governance are respected and ensure a clear understanding of how the internet operates. We must preserve the security and resilience of this single interoperable world and build the internet for billions. India must play a leading role in this.”

“India is a fast-growing economy and there are challenges like delivery of cutting-edge innovation and also of digital inequality. We need to prioritize digital inequality in terms of access to devices and infrastructure. Trust and safety are also important and effective in building strong institutions. Government and public sectors have huge data of citizens and we have to make sure that it is safe. We have to cooperate regionally, nationally and globally for internet governance to strengthen public participation and accountability,” said Anriette Esterhyusen, Chair, MAG IDoT

“We should use the application of technology to reach out to the masses. Many things like AI are coming that would require internet connectivity. If we can remove the existing roadblocks in policies and regulations, we can achieve the next level of our Prime Minister’s vision of a Digital India,” said BK Syngal.

The digital drive in India is in full swing to bring 100% of the population on the internet network and the event is focusing on the digitization roadmap, opportunities, possibilities, and challenges in India. Through an open and inclusive process, IIGF is bringing together all stakeholders in the global internet governance ecosystem including government, industry, civil society, academia – as equal participants of the larger internet governance discourse.

“India believes in conversion of technology for the benefit of people. We are not only believing and talking, but we are also putting our vision into practice. India is the largest connected country in the world and it is important to discuss its global role for an open, safe & trusted and accountable internet and multistakeholderism,” said Anil Jain, CEO, NIXI. The India Internet Government Forum is an initiative associated with the UN Internet Governance Forum (UN-IGF). The Internet Governance Forum (IGF) is a multistakeholder platform bringing representatives together from various groups to discuss public policy issues related to the Internet.

Girish Mathrubootham, CEO & Founder, Freshworks is Digital Person of the Year at…

HCL Foundation in Partnership with the Govt. of UP Launches “Center for Agriculture…

Ministry of Housing and Urban Affairs announces the Nurturing Neighbourhoods…