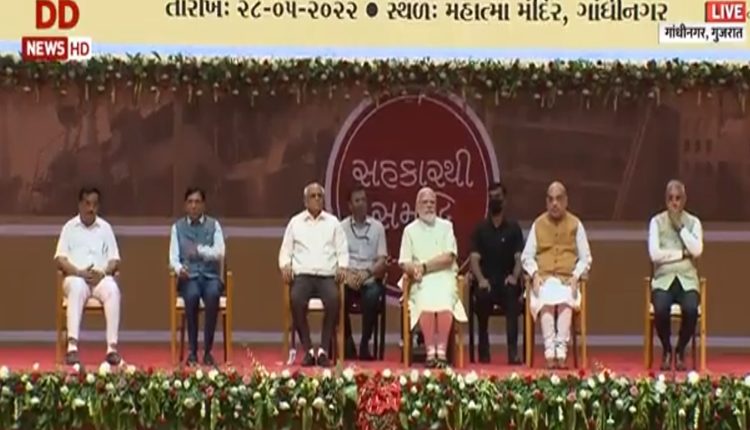 New Delhi: Prime Minister Narendra Modi said that we are moving forward in the direction of a model cooperative village. Addressing the Sahakar Sammelan- on “Sahakar Se Samriddhi” at Mahatma Mandir in Gandhinagar Gujarat, he said that six villages of Gujarat have been earmarked where cooperative arrangements will be completely made available.

Mr. Modi expressed happiness over the inauguration of the Nano Urea (Liquid) Plant at IFFCO Kalol. He said that power in a sack of urea has now been compressed into a bottle. This will reduce transportation costs and benefit small farmers. This plant has a capacity of manufacturing 1.5 lakh bottles per day, but 8 more such plants will be established in India in the coming days.

Mr. Modi said that after coming to power in 2014, the government brought in a 100 percent Neem coating of urea. This ensured that the farmers of the country got enough urea. He said that the government has started the work of restarting 5 closed fertilizer factories in UP, Bihar, Jharkhand, Odisha and Telangana simultaneously.

Prime Minister Modi said that the solution to most of our problems is self-reliance and a great model of self-reliance is our co-operative. He said that Gujarat was also fortunate for getting the leadership of Mahatma Gandhi and Sardar Patel.

Prime Minister Modi said that the example of the cooperative model of the dairy sector is before us. He said that today India is the largest milk producer in the world in which Gujarat has a major share.

He said that the government plays the role of just a facilitator in the dairy sector and the rest is done by cooperatives or farmers. He reiterated that the effort is to encourage a cooperative-based economic model in the country. Mr. Modi said that the biggest strength of a co-operative is trust and cooperation. He said that the small farmers are being empowered today and similarly, MSMEs are being made a strong part of India’s self-reliant supply chain.

Speaking on this occasion, Union Home and Cooperative Minister Amit Shah has said that a Nano Urea (Liquid) Plant of IFFCO inaugurated by Prime Minister Modi will save our land and water.

Retd Chief Secretary S.S Baloria releases Book “Old Age is a Boon and not a Curse”