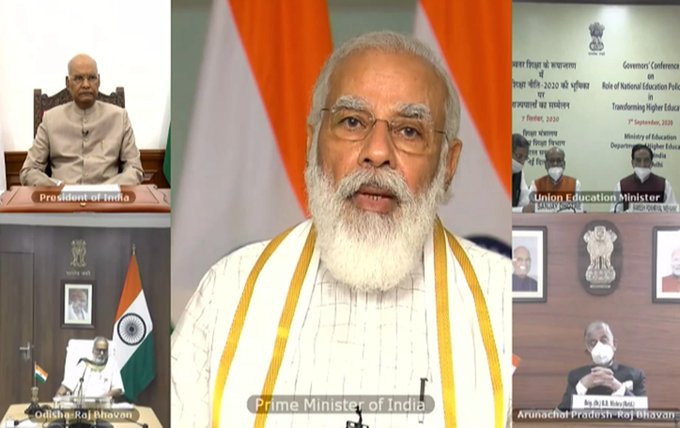 New Delhi: The Prime Minister Shri Narendra Modi addressed the inaugural session of Governors’ Conference on National Education Policy. The conference was also graced by the President of India and was attended by Governors & Lt. Governors of various states, UTs & Vice Chancellors of all the State Universities.

Speaking on the occasion, the Prime Minister said Education policy and education system are important means of fulfilling the aspirations of the country.

The Prime Minister said that though the responsibility of education lies with the Central, State and Local level Governments, their interference in the policy making should be minimal. He said the relevance and comprehensiveness of the education policy will increase when more and more teachers, parents and students will be associated with it. He added that the New Education Policy was drafted after receiving feedback from millions of people living in the city and villages in the country and from those related to the education sector. He said that now everyone including teachers and educationists are owning up to the policy.

The Prime Minister said there is an all round acceptance of the policy and that there is a feeling that the reforms should have been introduced in the previous education policy itself. He appreciated that there is a healthy debate on the policy and that it is necessary as the NEP is not only directed at reforming the education system but also at giving a new direction to the social and economic fabric of 21st century India. He said the policy aims at making India Self- Reliant or AatmaNirbhar.

Prime Minister said the policy aims at making the youth future ready in a fast changing scenario. He said this policy was designed to prepare the youth of the country on both fronts with knowledge and skills as per the requirements of the future.

The PM said that the National Education Policy provides for the rapidly changing times. He said technology is providing a level playing field in addressing the regional and social imbalance and is having a great impact on education.

He said efforts are being made that every aspect of higher education- academic, technical, vocational etc be taken out of silos.

Prime Minister called for implementing the NEP-2020 in Letter and Spirit.

On the 3rd Rashtriya Poshan Maah, Union Home Minister, Amit Shah has appealed all citizens to take a pledge and contribute towards a malnutrition-free India

Microsoft and Tenova Strengthen their Partnership to Innovate the Metals Industry