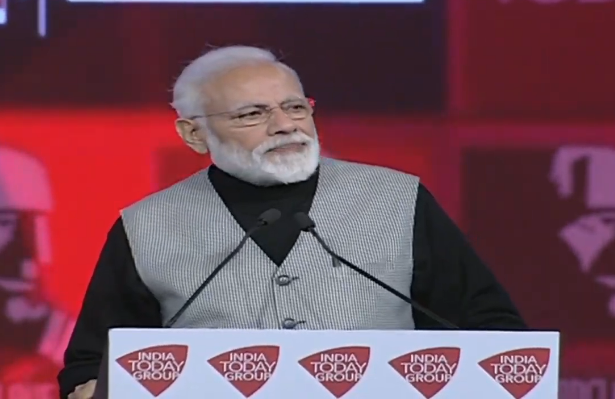 He appreciated the India Today Group for the awareness spread by them about the Swachh Bharat Mission.

Reflecting on his tenure so far, as Prime Minister, he said that his relative lack of experience at the national level turned out to be a blessing in disguise.

Taking the example of apprehensions that were expressed with regard to conduct of foreign policy, he said that the events of the last few days would have set at rest doubts in this regard.

He asserted that today’s India is a New India and a different India. He said the life of every soldier is precious, and today no one can mess with India. He said the Government is committed to taking every decision in national interest.

He questioned the stance of those, who doubt the intentions of the Government and the Armed Forces. He said that in opposing Narendra Modi, these people have started opposing India as well, and are harming the country. He said such people doubt the Indian Armed Forces, but trust those who foment terrorism in India. Specifically, he said that India felt the absence of the Rafale fighter jet recently, over which a lot of politics has been played. He strongly criticized those whose actions adversely affect national security.

He said that those who ruled the nation for many years had interests in two things – doles and deals. He said that the biggest sufferers of this approach were our Jawans and Kisans.

He said that the defence sector suffered because of the deals made by some, while agriculture suffered because there was no concrete policy beyond doles. These doles were given so that the poor remain poor and remain at the mercy of the political class, he added. The best example of this is the farm loan waivers, he said. He explained that the PM Kisan Samman Nidhi, a comprehensive scheme for farmer welfare, is part of the Government’s different approach to empower farmers. It was launched within 24 days of announcement, he added.

He explained that fifty five months of his Government, and the fifty five years of the others have given two contrasting approaches to governance.

They had a ‘token approach’, we have a ‘total approach,’ he said. In this context, he mentioned initiatives taken in the areas of One Rank One Pension for the Armed Forces; financial inclusion for the poor; clean cooking fuel (Ujjwala Yojana); Power for all; and Housing for all.

He asked a series of questions, such as why India was not Open Defecation Free till now; why there was no War Memorial or Police Memorial built for so many decades, etc.

He said India is today removing poverty at a rapid rate, and is the fastest growing large economy. He explained how Infrastructure is being built at a rapid rate. He said that his Government believes in combining Acts (laws or initiatives) with Action. He said the period from 2014 to 2019, was to fulfil basic necessities for all; while the period from 2019 onwards is the period of fulfilling aspirations and achieving new heights of progress.