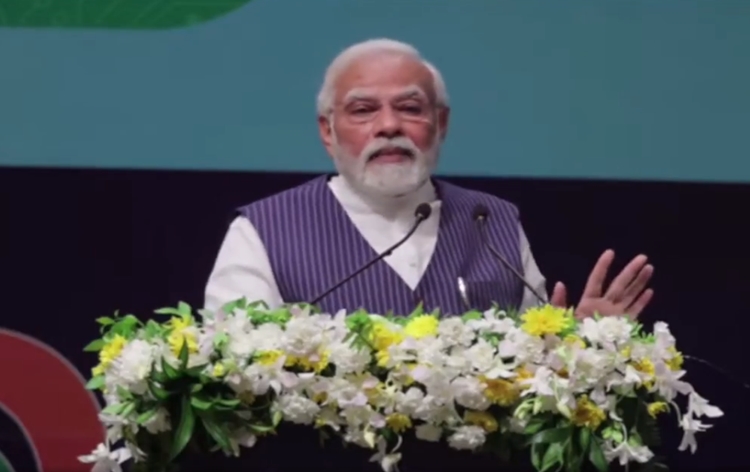 The Prime Minister, Shri Narendra Modi addressed a Natural Farming Conclave today via video conferencing. The conclave, organised in Surat, Gujarat, is witnessing participation of thousands of farmers and all other stakeholders who have made adoption of Natural farming in Surat a success story. The conclave was also attended by the Governor and Chief Minister Gujarat.
Speaking on the occasion, the Prime Minister said that today’s programme is an indication of how Gujarat is leading the country’s resolution of achieving the goals of the Amrit Kaal. “Success of Surat in connecting 75 farmers in every panchayat with natural farming is going to become an example for the entire country”, the Prime Minister said. He highlighted the role of Sarpanches and congratulated the farmers for moving ahead in the direction of a natural way of farming.

The Prime Minister said “In connection with 75 years of independence, the country has started working on many goals which will become the basis for major changes in the times to come. The basis of progress and speed of the country is the spirit of ‘Sabka Prayas’, which is leading this development journey of ours.” That is why, he said that Gram Panchayats have been given a key role in the welfare projects for the poor and the deprived.

He said that local bodies played a concerted role in selecting 75 farmers from every panchayat and hand-holded them with training and other resources. This has led to a situation where more than 40 thousand farmers in 550 panchayats have become involved in natural farming. This is a great beginning and is very encouraging. The Surat Model of natural farming can become a model for the entire country, he said.

The Prime Minister remarked that when big projects are undertaken with the power of people’s participation then their success is ensured by the people of the country themselves. Shri Modi gave the example of the Jal Jeevan Mission where people were given a key role in the project. Similarly “The extraordinary success of the Digital India Mission is also the country’s answer to those who used to say that bringing change in the village is not easy. Our villages have shown that villages can not only bring change but can also lead the change.” The Prime Minister expressed confidence that Jan Andolan (People’s movement) regarding natural farming will also be a huge success in the coming days. Farmers who will get involved early with this movement will reap great benefit, he said.

The Prime MInister emphasized “at the basis of our life, our health, our society is our agriculture system. India has been an agriculture based country by nature and culture. Therefore, as our farmer progresses, as our agriculture progresses and prospers, so will our country progress.” He reminded the farmers that natural farming is a means of prosperity as well as respecting and serving our mother earth. “When you do natural farming, you serve Mother Earth, protect the quality of the soil, its productivity. When you do natural farming you are serving nature and the environment. When you join natural farming, you also get the privilege of serving Gaumata”, he added.

The Prime Minister pointed out that the entire world is talking about a sustainable lifestyle. “This is one area where India has led the world for centuries, therefore, now is the time when we move forward on the path of natural farming and take full advantage of the global opportunities that are emerging”, he said. Shri Modi also talked about the measures taken by the government for promoting natural farming in the form of schemes like ‘Paramparagat Krishi Vikas Scheme’ that are providing resources and training for traditional farming. 30 thousand clusters have been created all over the country under the scheme for the benefit of the lakhs of farmers. 10 lakh hectares will be covered under the ‘Paramparagat Krishi Vikas Scheme’. Natural farming, the Prime MInister said, has been linked with the Namami Gange project as a separate campaign has been undertaken to create a natural farming corridor along the Ganga river.

The Prime Minister also informed about the quality assurance system for certification of produce of natural farming. He also said that certified products are fetching good prices when farmers export them.

Recalling the natural farming knowledge hidden in the scriptures and popular culture of India, the Prime Minister requested the institutions, NGOs and experts to do research on the ancient knowledge and how that can be communicated to farmers as per the demands of the modern times. He also expressed confidence that the beginning of 75 farmers taking up natural farming in every panchayat will soon increase manifold as demand for this chemical-free natural product is bound to increase. .

As part of Azadi ka Amrit Mahotsav, Prime Minister in his address at Gujarat Panchayat Mahasammelan in March, 2022 had exhorted at least 75 farmers in each village to adopt the Natural way of farming. Guided by this vision of Prime Minister, Surat District undertook a concerted and coordinated effort to sensitise and motivate different stakeholders and institutions like farmer groups, elected representatives, talathis, Agriculture Produce Marketing Committees (APMCs), Cooperatives, Banks etc, in the district to help farmers in adoption of Natural Farming. Consequently, at least 75 farmers were identified in each Gram Panchayat and were motivated and trained to undertake Natural Farming. The farmers were trained in 90 different clusters resulting in the training of more than 41,000 farmers across the district.