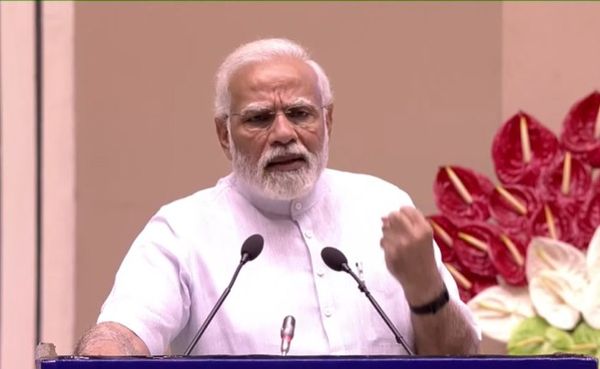 New Delhi: Prime Minister Narendra Modi today said the government is making necessary policy changes to encourage MSME sector in the country. He added that the Centre has increased the budget by more than 650 percent in the last eight years to strengthen the sector.

Addressing the Udyami Bharat Programme in New Delhi, Mr. Modi said the Micro, Small and Medium Enterprises (MSME) sector accounts for almost one third of India’s economy and it has a very important role in India’s growth journey.

He added that for the government MSME means Maximum Support to Micro Small and Medium Enterprises and said a self reliant fund of 50 thousand crore rupees has been released for the sector. The Prime Minister also asked MSMEs to register on the GeM portal for supplying goods to the government.

Mr. Modi said the government has decided that for orders up to 200 crore rupees, no global tender will be undertaken and this is in some ways a reservation for the MSMEs.

Mr Modi said, under the Emergency Credit Line Guarantee Scheme, the central government has ensured 3.5 lakh crore rupees for the MSMEs. Mr. Modi also said the government has taken the resolve to take local products across the globe and several initiatives have been introduced to strengthen India’s Make in India supply chain.

Talking about Khadi, the Prime Minister said the turnover of Khadi and Village Industries has crossed one lakh crore rupees and Khadi sales have increased four times in the last eight years. He said that difficulty in getting loans without guarantees was a major obstacle for the vulnerable sections of the society to pursue the path of entrepreneurship. After 2014, it was decided to enlarge the ambit of entrepreneurship through Sabka Sath, Sabka Vikas, Sabka Vishwas and Sabka Prayas. Mr. Modi added that Mudra Yojana has a formidable role to play in making entrepreneurship easy for every Indian. This scheme of bank loans without guarantee has created a large section of women entrepreneurs, Dalit, backward, tribal entrepreneurs in the country. He informed that about 19 lakh crore rupees has been given as a loan under this scheme so far.