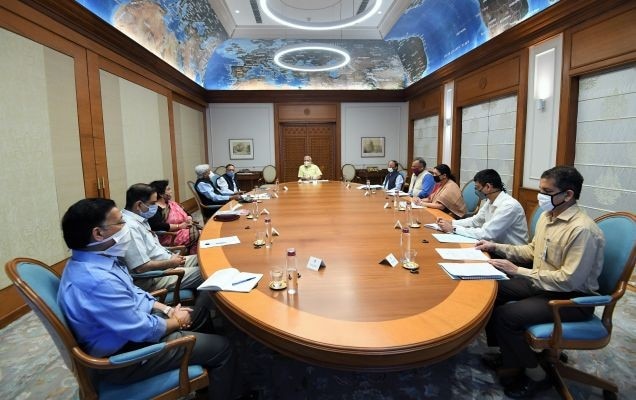 New Delhi: The PM Narendra Modi took a detailed review of the current status of India’s efforts in vaccine development, drug discovery, diagnosis and testing. Indian vaccine companies are well known for their quality, manufacturing capacity and global presence. Today in addition, they have come across as innovators in early stage vaccine development research. Similarly, Indian academia and start-ups have also pioneered in this area. Over 30 Indian vaccines are in different stages of corona vaccine development, with a few going on to the trial stages.

Similarly, in drug development three approaches are being taken. First, the repurposing of existing drugs. At least four drugs are undergoing synthesis and examination in this category. Secondly, the development of new candidate drugs and molecules are being driven by linking high performance computational approached with laboratory verification. Thirdly, plant extracts and products are being examined for general anti-viral properties.

|
In diagnosis and testing, several academic research institutions and start-ups have developed new tests, both for the RT-PCR approach and for the antibody detection. In addition, by linking laboratories all over the country, capacity for both these kinds of tests have been enormously scaled up. The problem of importing reagents for testing has been addressed by consortia of Indian start-ups and industry, meeting current requirements. The current thrust also holds promise for the development of a robust long-term industry in this area.

The review by the PM took note of the extraordinary coming together of academia, industry and government, combined with speedy but efficient regulatory process. The PM desired that such coordination and speed should be embedded into a standard operating procedure. He emphasized that what is possible in a crisis should be a part of our routine way of scientific functioning.
Appreciating the scientific coming together of computer science, chemistry and biotechnology in drug discovery, the PM suggested that a hackathon be held on this subject, linking computer science to synthesis and testing in the laboratory. The successful candidates from the hackathon could be taken up by the start-ups for further development and scaling up.

The PM added that the innovative and original manner in which Indian scientists, from basic to applied sciences, have come together with industry is heartening. This kind of pride, originality and sense of purpose should dominate our approach going ahead. It is only then that we can be amongst the best in the world and not followers, in science.

iednewsdesk Oct 20, 2021
We value the different experiences and perspectives that staff and students from across the globe bring to our…