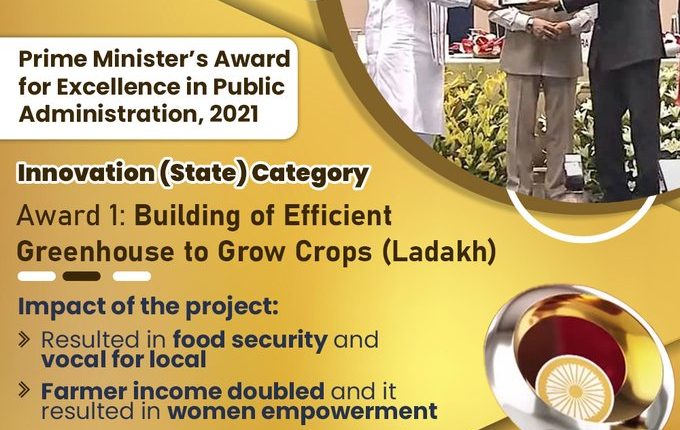 Speaking on the occasion, the Prime Minister greeted all the ‘Karmayogis’ on the Civil Service Day. He started with suggestion for improving the governance and knowledge sharing. He suggested all the training academies can virtually share the process and experiences of the award winners on a weekly basis. Secondly, from the award-winning projects, one scheme may be chosen for implementation among few districts and the experience of the same may be discussed in the next year’s Civil Service Day.

The Prime Minister recalled that he has been interacting with Civil Servants for last 20-22 years, first, as Chief Minister and later, as the Prime Minister. It has been a mutually learning experience, he said. Shri Modi underlined the significance of this year’s celebration as it is taking place in the year of Azadi Ka Amrit Mahotsav. He asked the administrators to call past district administrators in this special year to the district. This will infuse new energy in the district and will provide a welcome dynamism in perspective of district administration informed by the experience of the past. Similarly, Chief Ministers of states can call former Chief Secretaries, Cabinet Secretaries from the state in this landmark year to commemorate and take benefit from the flag-bearers of administrative machinery that have contributed significantly in the journey of Independent India. This will be an appropriate way of honouring the civil service in the year of Azadi ka Amrit Mahotsav.

He said Amrit Kaal is not just for celebration or praising the past and journey from 75 to 100 year just cannot be routine. “India @100 can’t be routine. This 25-year period should be seen as a unit and we should have a vision from now onwards itself. This celebration should be a watershed.” Every district should move with this spirit. There should not be any let up in the efforts and this is the time to rededicate ourselves to the pledges and directions that Sardar Patel gave on this day in 1947, the Prime Minister said.

The Prime Minister said that in our democratic set up we should be committed to three goals. The first goal is that there should be a change in the life of the common people in the country, their life should be easy and they should also be able to feel this ease. Common people should not have to struggle in their dealings with the government, benefits and services should be available to them without hassle. “Taking the dreams of the common man to a level of resolve is the responsibility of the system. This Sankalp (resolve) should be taken to Siddhi (completion) and that should be the goal for all of us. We should be there to handhold at every stage in this journey of Sapna (dream, to Sankalp (resolve) to Siddhi (completion)”, he added. Secondly, given the growing stature and changing profile if India, it is imperative that whatever we do, that should be done in the global context. If we don’t follow the activities at the global level, it will be very difficult to ascertain our priorities and focus area. We need to develop our schemes and governance models keeping this perspective in mind, The Prime Minister said. The Prime Minister emphasized that our systems and models should keep on getting updated at a regular speed, we cannot deal with the challenges of today with the systems of last century. Thirdly, he said “Wherever we are in the system, our prime responsibility is the unity and integrity of the country, there cannot be any compromise. Even local decisions should be measured on this touchstone. Every decision of ours should be evaluated on its capacity to provide strength to the country’s unity and integrity. ‘Nation First’ should always inform our decisions.

The great culture of India, our country is not made of royal systems and royal thrones. The tradition that we have for thousands of years has been a tradition of carrying on the strength of the common man. This also informs the county’s spirit of accepting change and modernity while preserving our ancient wisdom, the Prime Minister said. He highlighted that it is the duty of the government system to nurture, unleash and support the capability of the society. He gave examples of innovations taking place in the start-up ecosystem and agriculture and asked the administrators to play a nurturing and supportive role.

Underlining the difference between the typist and sitar player, the Prime Minister emphasized the need to live an examined life, a life of dreams and enthusiasm and purpose. “I want to live every moment so that I can serve and help other to live well”, he said. Shri Modi exhorted the officers to live beyond the beaten path and think out of box. Reform in governance should be our natural stance, he continued, governance reforms should be experimentative and as per the needs of the time and country. He referred to reduction of obsolete laws and number of compliances as one of his key priorities. The Prime Minister said that we should not change only under pressure but should try to improve pro-actively. We should not be governed by the regulations and mentality that emerged in the period of scarcity, we should have an attitude of abundance. Similarly, we should anticipate rather than just react to the challenges. PM emphasized that “during the last 8 years, many big things have happened in the country. Many of these campaigns are such that there is behavioral change in its origin”. He said he is not of the temperament of Rajniti but of Janniiti.

He concluded by requesting the officers to adopt the key reforms in their personal lives. For example, whether cleanliness, use of GeM or UPI is there in their own life or not.

Prime Minister’s Awards for Excellence in Public Administration have been instituted with a view to recognize the extraordinary and innovative work done by Districts/implementing units and Central/State organisations for the welfare of common citizens. They are also conferred for effective implementation of identified priority programs and innovation.

Exemplary work done in the following five identified priority programmes will be given awards which is to be presented on Civil Services Day 2022: (i) Promoting “Jan Bhagidari” or People’s Participation in Poshan Abhiyan, (ii) Promoting excellence in sports and wellness through Khelo India scheme, (iii) Digital payments and Good Governance in PM SVANidhi Yojana, (iv) Holistic Development through One District One Product scheme, (v) Seamless, End-to-End Delivery of Services without Human Intervention.

A total of 16 awards for 5 identified Priority Programmes and for innovations in the sphere of public administration/delivery of services etc. will be given this year.