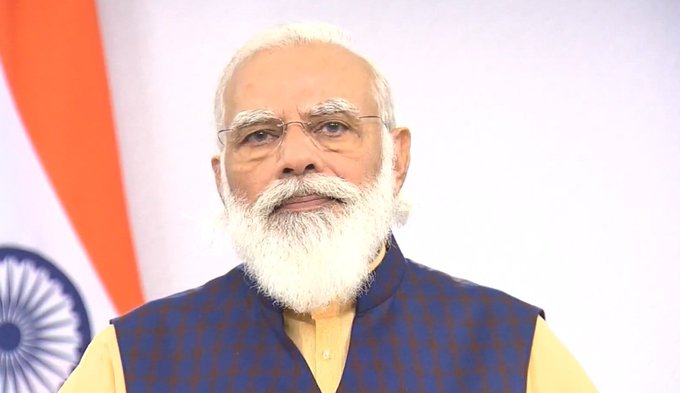 New Delhi: PM delivered inaugural address at 4th India Energy Forum CERAWeek through video conference. The theme of this edition is “India’s Energy Future in a world of Change”.

Speaking on the occasion, the Prime Minister said India is full of energy and its energy future is bright and secure. He elaborated that in spite of various challenges like fall in energy demand by almost one third, prevailing price instability, impacted investment decisions, projected contraction in global energy demand over the next few years, India was projected to emerge as a leading energy consumer and is projected to nearly double its energy consumption over the long term.

The Prime Minister pointed that India is the third largest and the fastest growing aviation market in terms of domestic aviation and Indian carriers are projected to increase their fleet size from 600 to 1200 by 2024.

He said India believes that access to energy must be affordable and reliable. That is when socio-economic transformations can take place. He said the energy sector empowers people and furthers “Ease of Living” and he listed Government’s initiatives to achieve this. He said these initiatives particularly helped the rural people, middle class and the women.

The Prime Minister said India’s Energy Plan aims to ensure energy justice while fully following India’s global commitments for sustainable growth. This means more energy is needed to improve the lives of Indians with a smaller carbon foot-print. He envisioned India’s energy sector to be growth centric, industry friendly and environment conscious. He said that is why India is among the most active nations in furthering renewable sources of energy.

The Prime Minister listed the interventions which made India the most attractive emerging market for clean energy investment viz, distributing more than 36 crore LED bulbs, reducing the cost of LED bulbs by 10 fold, installing over 1.1 crore smart LED street-lights in the last 6 years. He said these interventions have enabled an estimated energy savings of 60 billion units per year, estimated green-house gas emission reduction of over 4.5 crore tonnes of Carbon dioxide annually and monetary savings of around Rs. 24,000 crore annually.

The Prime Minister remarked that India is well on track to meet the global commitment. He said the target to increase the installed renewable energy capacity to 175 GW by 2022 has been further extended to 450 GW by 2030. He said in spite of India having one of the lowest carbon emissions than the rest of the industrialized world, India would continue its efforts to fight climate change.

The Prime Minister said the reform in the energy sector has been fast paced in the last six years. He listed many path-breaking reforms brought out recently like the reforms in Exploration and Licensing Policy, shifting the focus from ‘revenue’ to ‘production’ maximisation, focus on greater transparency and stream-lined procedures and plan to grow refining capacities from about 250 to 400 Million Metric tonnes per annum by 2025. He said increasing domestic gas production has been a key government priority and would be achieved through ‘One Nation One Gas Grid’ to shift the nation towards a gas-based economy.

The Prime Minister urged the community to make the crude pricing more responsible. He urged the community to work towards creating transparent and flexible markets for both oil and gas. He said to increase domestic production of natural gas and to bring uniformity in the market price discovery of gas, the Government has brought Natural Gas Marketing Reforms which would give greater marketing freedom in the sale of natural gas through e-bidding. He added India’s first automated national-level gas trading platform was launched in June this year which prescribes standard procedures to discover the market price of gas.

The Prime Minister said the Government is moving forward with the vision of ‘आत्मनिर्भर भारत.’ He added a Self-reliant India will also be a Force Multiplier for the global economy and Energy security is at the core of these efforts. He said these efforts have started yielding positive results by way of increased investment in the oil and gas value chain during these challenging times and similar signs are seen in other sectors too. He said the Government is driving strategic and comprehensive energy engagements with the key global energy players. He added as part of India’s Neighbourhood First Policy, development of energy corridors with our neighbouring countries is prioritized for mutual benefit.

The Prime Minister said like the seven horses driving the chariot of Sun god, India’s energy map will have seven key drivers.

1. Accelerating our efforts to move towards a gas-based economy.

2. Cleaner use of fossil fuels particularly petroleum and coal

5. Increasing the contribution of electricity to de-carbonize mobility.

6. Moving into the emerging fuels including hydrogen

7. Digital innovation across all the energy systems.

He said there will be continuity of these robust energy policies that have been in place over the last six years.

The Prime Minister said India Energy Forum – CERAWeek is serving as an important platform between industry, government and society and wished this conference to have fruitful deliberations for a better energy future.