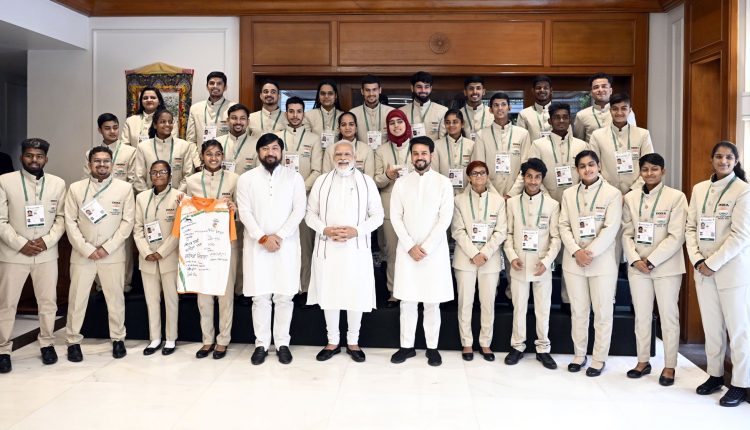 New Delhi: Prime Minister Narendra Modi interacted with the Indian contingent for recently held Deaflympics as he hosted them at his residence today. In the best-ever performance, Indian team won 16 medals including 8 Gold medals in the Deaflympics, held in Brazil.

Interacting with Rohit Bhaker, senior member of the contingent, the Prime Minister discussed his way of dealing with the challenges and his way of assessing his opponents. Rohit also told the Prime Minister about his background and inspiration for getting into sports and staying for so long at the highest level.

The Prime Minister told the ace badminton player that his life as an individual and sportsperson is an inspiration.

He also complimented him for his perseverance and not yielding to the obstacles of life. Modi noted the continued zeal in the player and his rising performance with advancing age. “Not resting on laurels and not feeling satisfied is one of the key quality of a player. A player sets ever higher goals and strives to attain them”, the Prime Minister said.

Digital India Week 2022 to be inaugurated by PM Narendra…

Wrestler Virender Singh told about the legacy of his family in wrestling. He also narrated his satisfaction in finding opportunities and competition in the deaf community. The Prime Minister noted his medal winning consistent performance in Deaflympics since 2005 and complimented him for his desire to excel. The Prime Minister appreciated his position as a veteran and also as a keen learner of the sport. “Your will power inspires everyone. Country’s youth and sportspersons both can learn from your quality of consistency. Reaching the top is difficult but more difficult is to stay there and keep trying to improve”, said the Prime Minister.

Shooter Dhanush also credited his family support for his continued quest for excellence. He also told how yoga and meditation helped him. He told that he considers his mother his role model. The Prime Minister paid tributes to his mother and his family for supporting him. He expressed happiness that Khelo India is helping the athletes at the grassroot level.

Jafreen Shaik, Tennis also talked about support of her father and family. She expressed her happiness on interacting with the Prime Minister. The Prime Minister said that apart from being the synonymous with the prowess and capability of the daughters of the country, she is a role medal for the young girls. “You have proven that if India’s daughter set their eyes on any goal, no obstacle can stop them”, the Prime Minister added.

The Prime Minister said that their achievements are great and their passion indicates much higher glory for them in future. “Maintain this passion and enthusiasm. This passion will open new avenues of our country’s growth and a bright future will be ensured” he said. The Prime Minister continued that when a divyang excels at international sporting platforms, the achievement reverberates beyond sporting accomplishment. It shows the culture of the country and indicates sensitivity. Feelings and a regard for their capabilities in the country. That is why “your contribution in creating positive image is many times more than other sportspersons”, the Prime Minister added.

The Prime Minister tweeted after the interaction “I will never forget the interaction with our champions who have brought pride and glory for India at the Deaflympics. The athletes shared their experiences and I could see the passion and determination in them. My best wishes to all of them.” The Prime Minister also noted that “due to our champions that this time’s Deaflympics have been the best for India!”

Ghent University: Proteins from microbial fermentation get boost with…