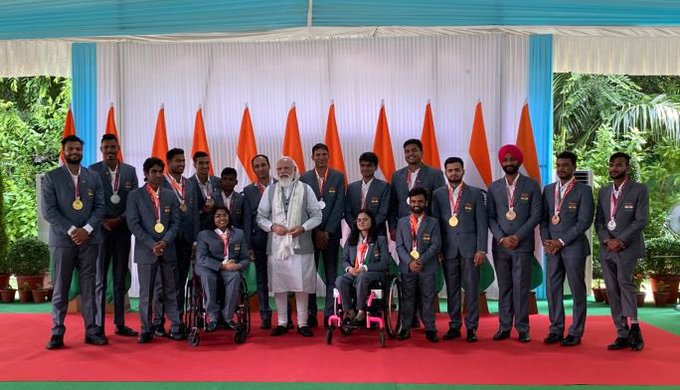 Prime Minister had a candid and informal interaction with the entire contingent. He congratulated them for their record breaking historic performance at the Games. He said that their achievement will significantly boost the morale of the entire sporting community in the country, and budding sports persons will feel encouraged to come forward to take up sports. He added that their performance has led to awareness about sports increasing leaps and bounds.

Prime Minister especially praised the indomitable spirit and will power of the Contingent and said that the performance is praiseworthy in light of the insurmountable odds that the para-athletes have overcome in their lives.  Boosting the morale of those who couldn’t achieve a podium finish, the Prime Minister said that a true sportsperson does-not get bogged down by defeat or victory, and keeps on moving forward. He said that they are ambassadors of the country, and they have increased the prestige of the nation on the world stage through their remarkable performance.

Prime Minister said that through their ‘tapasya, purushartha and parakram’, the para-athletes have changed the way people look at them. He said that in this period of celebration of Azadi ka Amrit Mahotsav, they should identify a few areas outside of the world of sports and explore how they can motivate people and help bring change.

The para-athletes thanked the Prime Minister for giving them the invitation and said that sitting with him at the same table is a big achievement in itself. They especially thanked him for constant guidance, motivation and support throughout their endeavour, and said that the athletes of other countries were amazed when they came to know that their Indian compatriots received congratulatory phone calls from their Prime Minister. They highlighted how the government left no stone unturned in making the best possible arrangement for their training.

Several players gifted their signed sporting equipment, with which they won their medals, to the Prime Minister. A stole, signed by all medalists, was also gifted to the Prime Minister. He said that the sporting equipment would be auctioned and was welcomed by the athletes. Union Sports Minister and Union Law Minister were also present on the occasion.