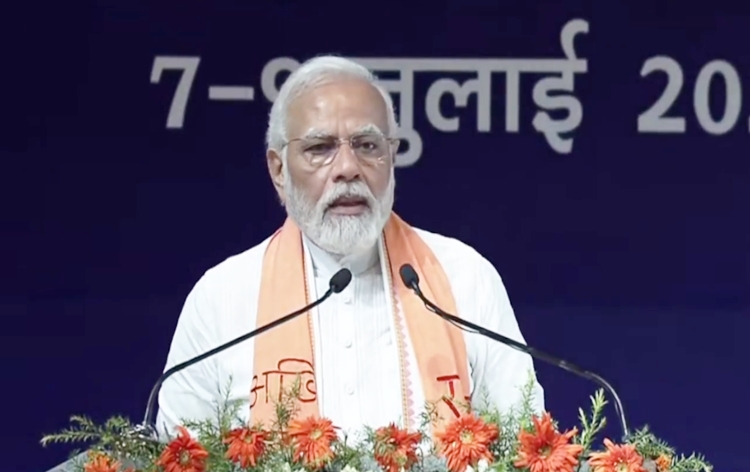 Varanasi: Prime Minister Narendra Modi inaugurated Akhil Bharatiya Shiksha Samagam in Varanasi today. Addressing the educationalists in Rudraksh Convention Centre in his Parliamentary Constituency, the Prime Minister said the New National Education Policy-2020 has been brought after broad deliberations. He said it aims to elevate education from the narrow mind-sets and link it to modern ideas. He added the National Education Policy aims to link skills and education to the future requirements of the 21st century.

The Prime Minister said the new generation is enthusiastic and up to date with the new technology and it is the responsibility of educationalists to be future ready.

The Prime Minister further said that universities and colleges should not only prepare degree holders, but create leaders who will take the country forward. He said the education system must produce the human resource which India actually needs.

Mr. Modi said the education sector is undergoing infrastructure overhaul that will make our students future ready. He added NEP has been brought in taking the future requirements in mind.

He also said Universities and colleges must promote sports culture in their campuses.

Mr. Modi said India is making forays into sectors s into sectors which were thought to be inaccessible a few years back. He said India is one of the fastest growing economies in the world today. He added India has the third largest start-up ecosystem.

Earlier, Union Minister of Education Dharmendra Pradhan said NEP-2020 wil inculcate logical and critical thinking in students. He said it will strengthen the sense of nationalism in the young minds of India. The Union Minister urged the educationalists to deliberate deeply on NEP during the next three days in Akhil Bharatiya Shiksha Samagam.

Uttar Pradesh Chief Minister Yogi Adityanath said the State has implemented NEP-2020 at graduation level. He urged Universities and Colleges to promote research and development which are at the core of the NEP-2020. He also said Universities should not isolate themselves with the government policies and must work in unison with government bodies.

Earlier, the Prime Minister inaugurated the Akshaya Patra Mid Day Meal Kitchen in Varanasi. The automatic kitchen will cater to around 150 government schools and has the capacity of cooking mid-day meals for around one lakh students. The Prime Minister inspected the mega kitchen and interacted with the students.