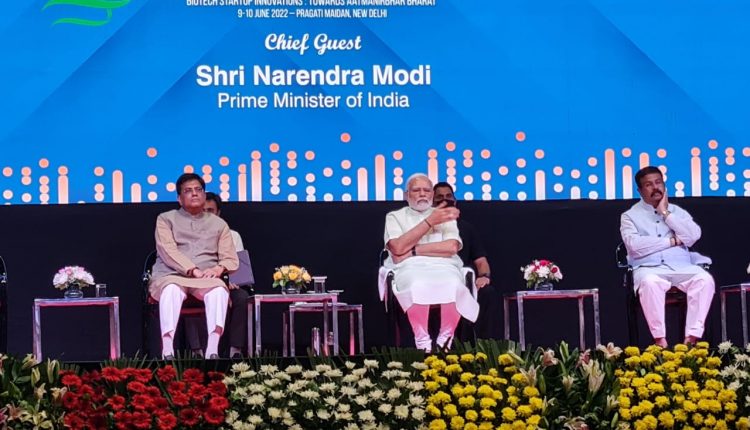 Inaugurating the Biotech Startup Expo – 2022 at Pragati Maidan in New Delhi today, Mr Modi said, India is not too far from reaching the league of top ten countries in Global Ecosystem of Biotech.

Mr. Modi said, in the last eight years, the number of start-ups in the country has increased from a few hundred to 70 thousand in about 60 different industries.

He added that out of this over five thousand start-ups are linked with the biotech sector.

The Prime Minister also said India is being considered the land of opportunities in the biotech sector due to diverse population, diverse climatic zones, talented human capital pool, efforts towards ease of doing business and demand for bio products.

When India is celebrating 75 years of Independence, the biotech sector will play a crucial role in adding pace to the development initiatives for the next 25 years, he added.

Saying that science and technology is now at the core of development across various sectors, Mr Modi said that the government’s unprecedented investments in physical and digital infrastructure have provided a fillip to the biotech sector.

He said the Centre has started several initiatives to bring together the best minds in research and development, which are leading to breakthroughs that are helping the development of science and technology.

Mr. Modi also said the mantra of Sabka Saath-Sabka Vikas is applicable on different sectors and now all sectors are being promoted in the whole of the government approach.

Speaking on the occasion, Science and Technology Minister Dr Jitendra Singh said the government is working for the next level of startup which is sustainable start ups.

About 300 stalls have been set up at the Expo, to showcase the applications of biotechnology in various fields including healthcare, genomics, biopharma, agriculture, industrial biotechnology, waste-to-value and clean energy.

President says, a new era of higher education is flourishing in J&K; Addresses Annual Convocation of IIM at Jammu