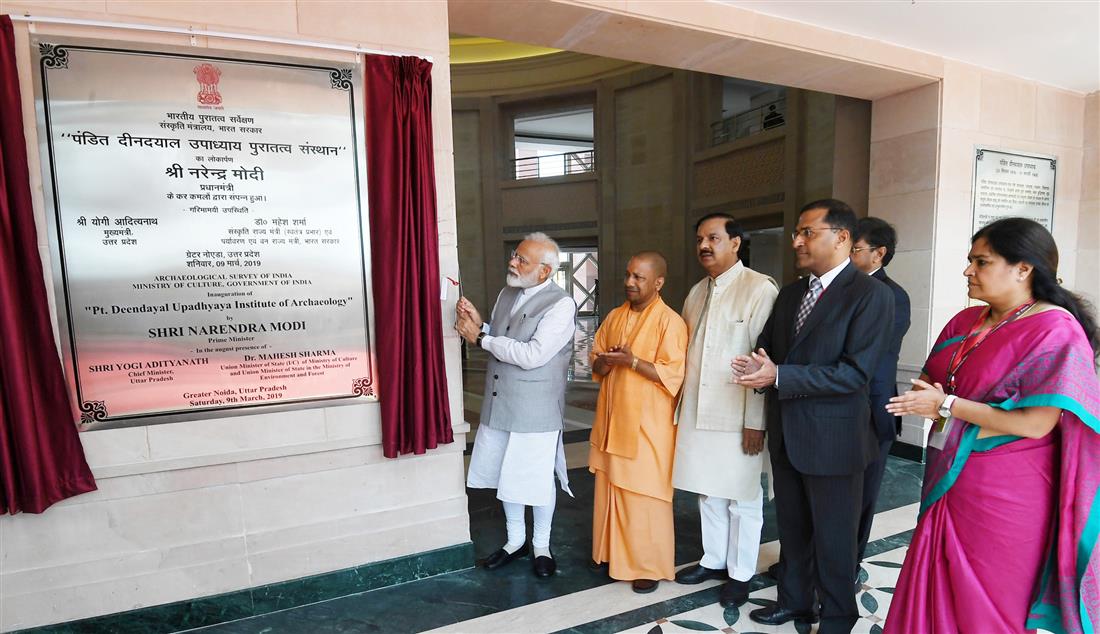 Noida: The Prime Minister, Shri Narendra Modi inaugurated the Pandit Deendayal Upadhyaya Institute of Archaeology at Greater Noida in Uttar Pradesh today. He also unveiled a statue of Pandit Deendayal Upadhyaya at the campus and paid floral tributes. Later he also visited the Deendayal Museum in the Institute campus. Present at the inaugural was Chief minister of Uttar Pradesh, Yogi Adityanath and Union Minister for Culture(I/c) Dr. Mahesh Sharma.

Addressing the gathering, the Prime Minister said that Noida has been completely transformed. Noida is now known for development and creating employment opportunities for the youth, the PM said. He added that Noida is being developed as the Make in India hub of the nation. In this context, Prime Minister mentioned about the presence of various electronic companies in Noida, including the world’s largest mobile factory.

The Prime Minister said that the country’s biggest airport is being built in Jewar, in Uttar Pradesh. Once completed, Jewar airport will not only bring ease of living but also will be economically beneficial to Uttar Pradesh.

Inaugurating the Pandit Deendayal Upadhyaya Institute of Archaeology, Prime Minister said that the institute will provide modern amenities for research scholars and students from India and all over the world.

Earlier, delivering the Welcome address, Dr. Mahesh Sharma, Minister of State for Culture(I/c) enumerated the various infrastructural Projects that have been inaugurated by the government in the course of development. Mentioning the dream of the leader Deendayal Upadhyayji, he said these projects have turned into reality the dream of the great leader for the nation.

Speaking at the event Shri YogiAdityanath, Chief Minister of Uttar Pradesh, congratulated the Ministry of Culture and thanked the Government for gifting the state with a prominent institute like this.

The state-of-the-art institute, built at an estimated cost of Rs. 289 crore is spread over 25 acres. The 3 star ultra modern green building of the Institute is equipped with all latest technologies. The Institute comprises of an auditorium with seating capacity of 1000 people, an open air theatre and an Archaeological Museum. The Institute of Archaeology (IA) is an academic wing of ASI under the Ministry of Culture. In the Institute , the students are provided with a supportive, enthusiastic and challenging academic atmosphere which enables them to achieve their full potential in the field of Archaeology.

iednewsdesk Oct 18, 2021
Professor David Card from University of California, Berkeley, is one of the three winners of the 2021 Nobel…

University of Bristol: New project to reduce generation costs of…