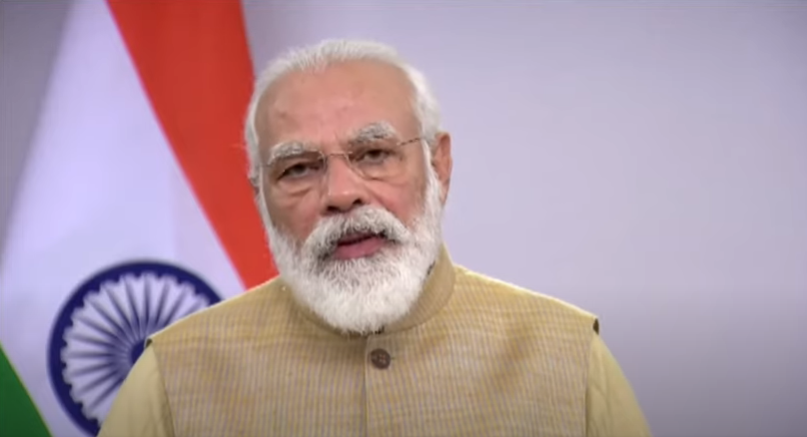 Speaking on the occasion, the Prime Minister said the Gate reflects the culture of Rajasthan and shall turn into a major domestic and international tourist attraction.

Referring to the two books, the Prime Minister said they are a true representation of Indian culture and philosophy and that authors play a great role in educating the society.

The Prime Minister recalled that every senior freedom fighter was involved in writing and guiding the people through their writings.

He lauded the Patrika Group for its efforts in the preservation of Indian culture, Indian civilization, values.

The Prime Minister lauded the founder of Patrika Group, Shri Karpoor Chandra Kulish’s contribution to journalism and the way the latter tried to spread the knowledge of Vedas in the society.

Referring to the two books, the Prime Minister said that the views espoused in the Vedas are timeless and are meant for the entire humankind. He wished that Upanishad Samvad and Akshar Yatra are read widely.

The Prime Minister stressed the need for our new generation not to get away from serious knowledge. He termed the Vedas and Upanishads as not only embodiments of spiritual knowledge but also of scientific knowledge.

PM also highlighted the necessity of Swachh Bharat Abhiyan to provide toilets to the poor, to prevent them from many diseases. He also spoke about the importance of Ujjwala scheme that aims at protecting mothers and sisters from smoke and about Jal Jeevan mission to provide water to every house.

Lauding Indian media for their unprecedented service to the public and their contribution in raising awareness about Corona, the Prime Minister said it has been actively disseminating government’s actions at the ground level and also bringing out flaws in them.

PM expressed happiness that the media is giving shape to the campaign “Atmanirbhar Bharat” which stresses on going “vocal for the local”. He stressed on the need for expanding this vision further. He reiterated that India’s local products are going global but India’s voice should also become more global.

He mentioned that the world listens to India more carefully now. In such a situation Indian media also needs to be global. Indian institutions should also give different literary awards of international stature.

PM congratulated the Patrika group for starting the International Journalism Award in the honour of Shri Karpoor Chandra Kulish.

“Hunar Haat”, being organised by Union Minority Affairs Ministry, to restart from October 2020

CSIR-CMERI Durgapur and NISE, Gurugram sign an MoU as a Strategic Association to bolster the Solar Energy Sector