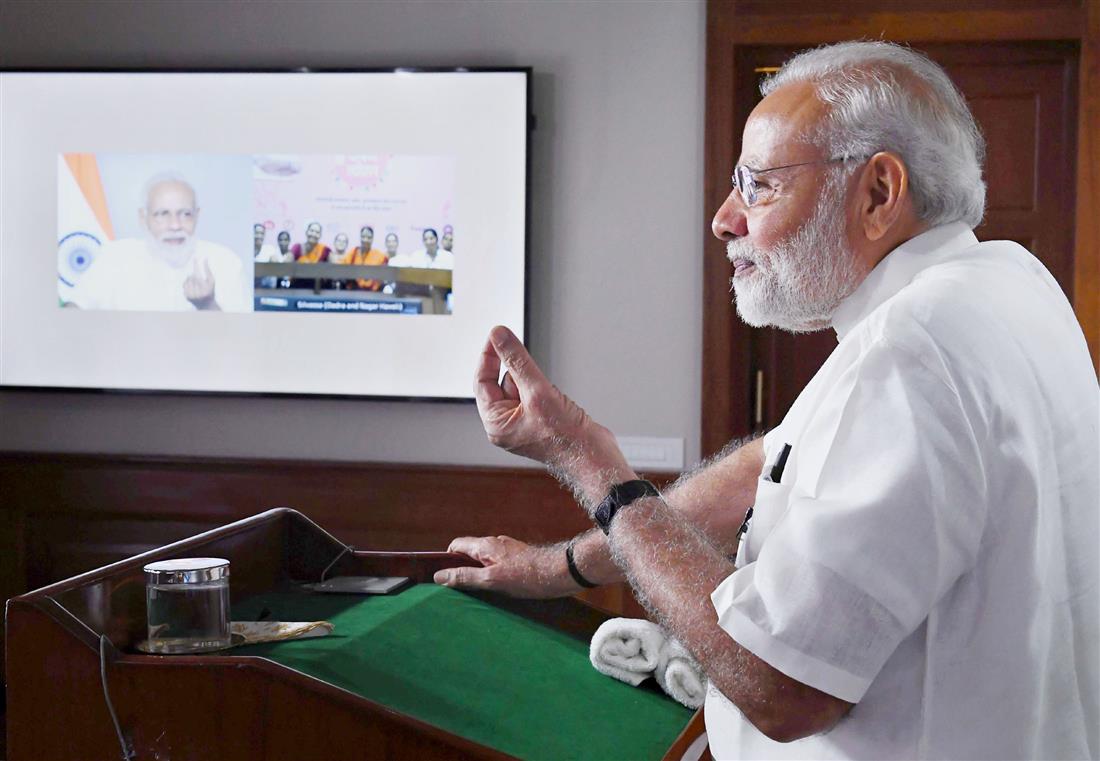 PM Narendra Modi interacts with ASHA, ANM and Anganwadi workers from all over the country through video bridge

New Delhi: Prime Minister interacted with the team of three As- the ASHA worker, Anganwadi worker and ANM (Auxiliary Nurse Midwife) from across the country through video conferencing. He appreciated their effort to work together, to use innovative means and technology, to improve the delivery of health and nutrition services and achieve the goal of POSHAN Abhiyan- reduction of malnutrition in the country.

Prime Minister recognised the contribution of grass-root health workers and thanked them for their efforts in building strong and healthy nation. The interaction was organised as part “poshan Maah”, being observed this month. The programme is aimed towards taking the message of nutrition to every household.

Highlighting the National Nutrition Mission, PM said that ‘Poshan Abhiyaan’ launched from Jhunjhunu in Rajasthan, targets reduction in incidence of stunting, anaemia, malnutrition and low birth weight. He added that it is essential to involve maximum women and children with this movement.

PM said that the Government has focussed on aspects relating to nutrition and quality healthcare. Vaccination efforts are progressing at a quick pace, helping women and children in particular.

The health workers and beneficiaries across the country shared their experiences with PM. Prime Minister appreciated the efforts and dedication of the team three ‘A’ – ASHA, ANM and Anganwadi workers for effective implementation of the Mission Indradhanush and for providing vaccination cover to more than 3 lakh pregnant women and 85 crore children.

PM also acclaimed the success of Newborn care, which benefits 1.25 million children of the country every year. It has been renamed as Home based child care under which the Asha worker will visit 11 times in first 15 month in place of earlier 6 visits in first 42 days of birth.

PM highlighted the link between the health and the growth of the nation; he said if the children of the country are weak then its growth would also slow down. For any infant first thousand days of life is very crucial. Nutritious food, dietary habits during this time, decide how its body will become, how it will be in reading and writing and how strong it will be mentally. If a citizen of the country is healthy, no one can stop the development of the country. So, in the initial thousand days, efforts are being made for developing a strong mechanism to secure the future of the country.

It is also noteworthy that according to WHO report, use of toilets under Swachh Bharat Abhiyan has potential to save 3 lakh innocent life. PM once again congratulated the fellow citizen for their dedication towards cleanliness.

Prime Minister also mentioned about the first beneficiary of Ayushman Bharat, baby Karishma also famous as Ayushman baby. He added that she has become the symbol of hope for more than 10 crore families who are going to benefit by launch of Ayushman Bharat from Ranchi on 23rd of this month.

India Education Diary Bureau Admin Aug 1, 2021
New Delhi: A ‘Samajik Adhikarita Shivir’ for distribution of aids and assistive devices to ‘Divyangjan’ under the…