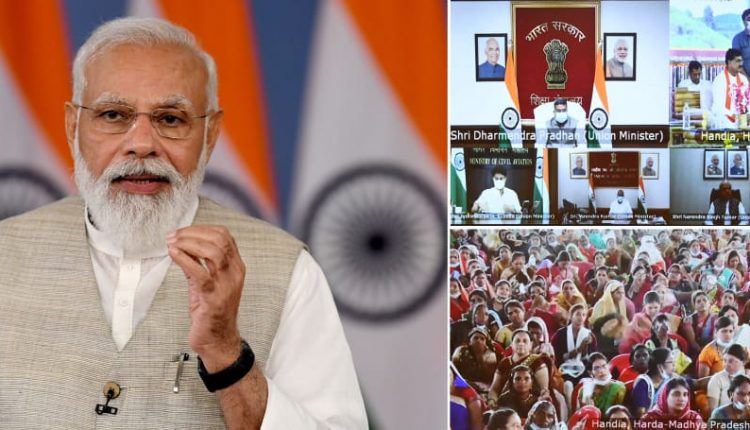 While interacting with Shri Pawan of Handia, Harda, the Prime Minister asked about his experience after getting the property card. Shri Pawan informed that with the card he could avail a loan of 2 lakh 90 thousand rupees and rented a shop and has already started repaying the loan. The Prime Minister asked him to increase digital transactions. Shri Modi also discussed the experience of the village about the drone doing the survey in the village. Shri Pawan said that his journey of getting the card was smooth and his life saw a positive transformation. The Prime Minister said that it is the government’s priority to enhance the ease of living for the citizens.

The Prime Minister enquired Smt Vineeta Bai, Budhni-Sehore about her plans after getting the property cards through this scheme. She replied that she wishes to open a shop by availing of a loan from the bank. She conveyed her sense of safety about her property. The Prime Minister said with this scheme caseload will come down in the courts and villages and the country will progress. PM wished her and her family for Navrati.

Addressing the gathering, the Prime Minister said availing loans from the banks have become easier with the launch of the PM SVAMITVA scheme. He lauded Madhya Pradesh for the speed with which it has implemented the scheme. Today 1.70 lakh families received cards in 3000 villages of the state. He said that this will card will become a vehicle of prosperity for them.

The Prime Minister said though it is often said that the soul of India resides in villages, however, even decades after the independence, the potential of the villages was shackled. The power of the villages, the land and the houses of the people of the village could not be fully utilized for their development. On the contrary, the energy, time and money of the people of the village were wasted in disputes, fights, illegal occupations over village land and houses. The Prime Minister remembered how Mahatma Gandhi was also worried about this problem and recalled ‘Samras Gram Panchayat Yojana’ which was implemented in Gujarat during his tenure as Chief Minister.

The Prime Minister stressed the importance of freeing the country’s villages, village property, land and house records from uncertainty and mistrust. He added that PM Swamitva Yojana is going to become a huge strength of our brothers and sisters of the village.

The Prime Minister remarked that the SVAMITVA Scheme is not just a scheme to provide property documents, but it is also a new mantra for development and improving trust in the villages of the country with the help of modern technology. “The Udan Khatola (drone) that is flying in villages and localities for the survey is giving a new flight to the villages of India,” he said.

The Prime Minister said the efforts of the government for the last 6-7 years is to make the poor free from dependence on anyone. Now, money is being sent directly to the bank accounts of farmers under PM Kisan Samman Nidhi for small farming needs, he said. Shri Modi said that gone are the days when the poor had to run pillar to post in the government offices for everything. Now the government itself is coming to the poor and empowering them. He also cited Mudra Yojana as an example of making finances available to people through loans without collateral. He said in the last 6 years about 29 crore loans amounting to 15 lakh crore have been approved for the people. He said today 70 lakh self-help groups are working in the country and women are being connected with the banking system via Jan Dhan accounts. He also mentioned a recent decision to enhance the limit of loans without collateral to the self-help groups from 10 lakh to 20 lakh. Similarly, more than 25 lakh street vendors have received loans under the SVANidhi scheme.

The Prime Minister said of late, many policy decisions have been taken so that farmers, patients and remote areas get maximum benefits from drone technology. A PLI scheme for encouraging drone production in India has also been announced so that a large number of modern drones are made in India and India becomes self-reliant in this important area. The Prime Minister also called upon scientists, engineers, software developers and start-up entrepreneurs to come forward to make low-cost drones in India. “Drones have the capability to take India to new heights”, he added.

Government has approved setting up of 7 Mega Integrated Textile Region and Apparel (PM MITRA पीएम मित्र) Parks with a total outlay of Rs. 4,445 crore in a period of 5 years