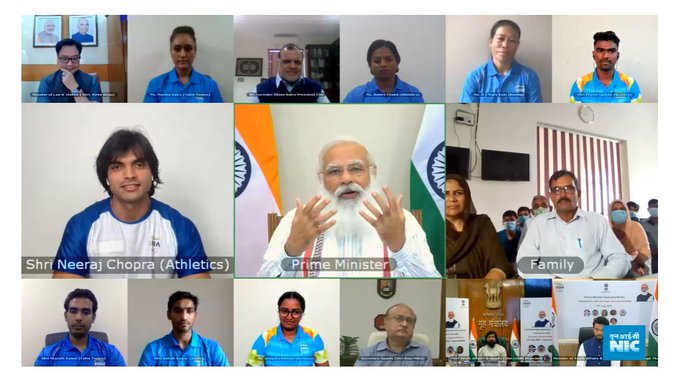 Shares an informal, spontaneous session with sportspersons and their families Wishes of 135 crore Indians are the blessings of the country for all of you: PM Better training camps, equipment, international exposure has been provided to the players : PM Athletes are a witnessing how the country is standing with each of them today with a new thinking and a new approach : PM For the first time, such a large number of players have qualified for the Olympics and in so many sports : PM There are many sports in which India has qualified for the first time : PM It is the responsibility of the countrymen to ‘Cheer4India’: PM

New Delhi: Prime Minister Shri Narendra Modi interacted with Indian athletes’ contingent bound for Tokyo Olympics today through video conference. The interaction by the Prime Minister is an endeavour to motivate the athletes ahead of their participation at the games. Shri Anurag Thakur, Minister for Youth Affairs & Sports; Shri Nisith Pramanik, MoS Youth Affairs and Sports and Shri Kiren Rijiju, Law Minister were also present on the occasion.

Talking to Neeraj Chopra (Javelin Throw), the Prime Minister inquired about the athlete’s experience with the Indian Army and also his recovery from injury. Shri Modi asked the athlete to give his best without getting bogged down by the weight of expectation. With Dutee Chand (Sprint), Shri Modi started with the meaning of her name that is ‘brightness’ and complimented her for spreading the light through her sporting skills. The Prime Minister asked her to forge ahead fearlessly as the entire India is behind the athletes. The Prime Minister asked Ashish Kumar (Boxing) why he chose Boxing. PM asked how he fought with both COVID-19 and kept with his training. The Prime Minister also praised him for not wavering from his goal despite the loss of his father. The athlete recalled the support network of family and friends in the process of recovery. Shri Modi recalled the occasion when cricketer Sachin Tendulkar lost his father in similar circumstances and how he gave tribute to his father through his sports.

The Prime Minister asked Elavenil Valarivan (Shooting) why she got interested in the sport. On a personal note, Shri Modi talked to the shooter who was raised in Ahmedabad, in Gujarati and greeted her parents in Tamil and recalled her early years as he was MLA from her area Mani Nagar. He enquired how she balances both her studies and sports training.

The Prime Minister talked to Saurabh Chaudhary (Shooting) of the role of yoga in improving concentration and mental poise. The Prime Minister asked the veteran player Sharath Kamal (Table Tennis) about the difference between previous and this olympics and learnt about the impact of pandemic on the occasion. Shri Modi said that his vast experience will help the entire contingent. With another Table tennis ace Manika Batra (Table Tennis), the Prime Minister was full of praise for her for training the poor children in sport. He remarked about her practice of wearing tricolor in her hand while playing. He asked whether her passion for dancing acts as a stress buster in her sports.

The Prime Minister asked how Vinesh Phogat (Wrestling) copes up with the heightened expectations due to her family legacy. Referring to her challenges, the Prime Minister asked how she dealt with them. He also talked to her father and asked about the ways of grooming such illustrious daughters. He enquired from Sajan Prakash (Swimming) about his grave injury and how he overcame it.

Talking to Manpreet Singh (Hockey) The PM said that interacting with him reminds him of hockey legends like Major Dhyan Chand, etc. and expressed the hope that his team will keep the legacy alive.

With Saina Mirza (Tennis), the Prime Minister remarked about the increasing popularity of Tennis sport and asked the senior player for her advice to the new aspirants. He also enquired about her equation with her partner in Tennis. He asked about the change she witnessed in sports during the last 5-6 years. Sania Mirza said that India is witnessing a self belief in recent years and that will reflect in the performance.

While addressing the Indian athletes, the Prime Minister regretted the fact that he could not host the athletes due to the pandemic. He remarked that the pandemic has changed their practice and even the year of the Olympics. He recalled his Mann ki Baat address when he exhorted the citizens to cheer for their sportspersons in the Olympics. He noted the popularity of the #Cheer4India. He said that the whole country is behind them and the blessings of all the countrymen are with them. He informed that people can login to the NaMo app and cheer for their sportspersons where special provisions have been made for the purpose. “These wishes of 135 crore Indians are the blessings of the country for all of you before entering the field of sports,” said the Prime Minister.

Urdu is one of the most beautiful languages spoken around the world: Vice President