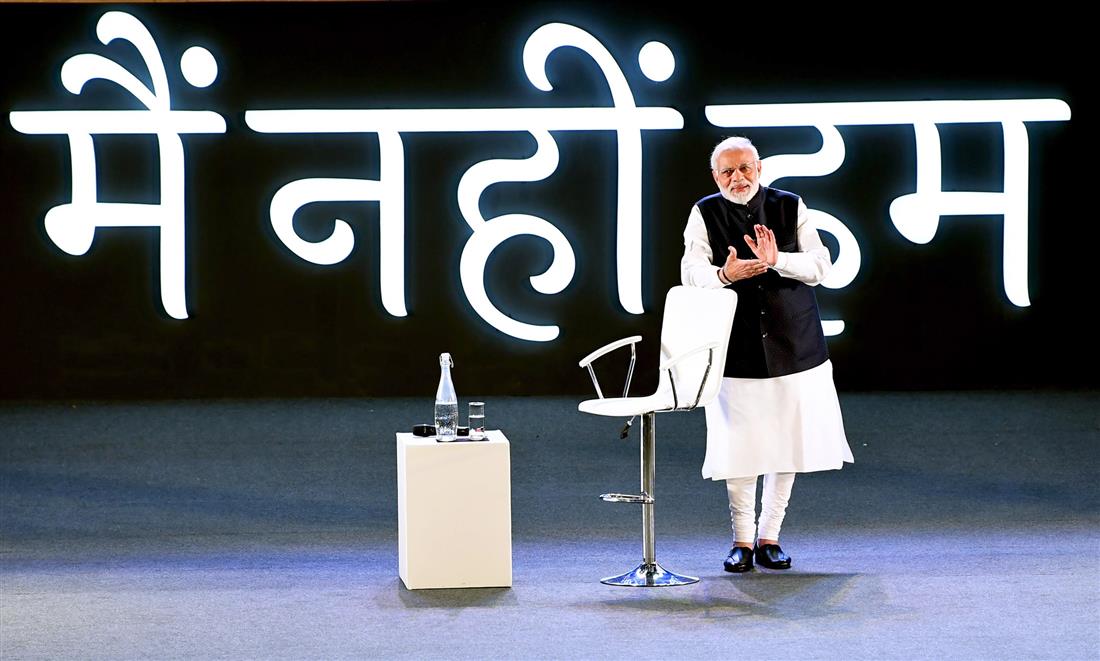 The portal, which works on the theme “Self4Society”, will enable IT professionals and organizations to bring together their efforts towards social causes, and service to society, on one platform. In doing so, the portal is expected to help catalyse greater collaboration towards the service of the weaker sections of society, especially by leveraging the benefits of technology. It is also expected to generate wider participation of interested people who are motivated to work for the benefit of society.

Interacting with a wide cross-section of IT and electronic manufacturing professionals, captains of industry and technocrats on the occasion, the Prime Minister said he is sure that people want to work for others, serve society and make a positive difference.

Among those who interacted with the Prime Minister today were Shri Anand Mahindra, SmtSudhaMurthy, and a number of young professionals, from India’s top IT companies.

Every effort, however big or small, must be valued, the Prime Minister said, adding that Governments may have schemes and budgets but the success of any initiative lies in public involvement.Let us think about how we can use our strengths to bring a positive difference in the lives of others, the Prime Minister exhorted the gathering.

The Prime Minister noted that he observes India’s youngsters leveraging the power of technology very well. He said that they are using technology not only for themselves but also for the welfare of others. He described this as a wonderful sign. Noting that there are many start-ups in the social sector, the Prime Minister wished the young social entrepreneurs well.

Responding to questions in a townhall style interaction, the Prime Minister said that it is essential to step out of our comfort zone. There is so much to learn and discover, he added.

IT professionals explained their efforts towards social volunteering, especially in skilling and cleanliness.In response to an observation, the Prime Minister asserted that the symbol of the Swachh Bharat Mission is the spectacles of Bapu, the inspiration is Bapu and we are fulfilling Bapu’s vision.

The Prime Minister said that on many occasions, what the “Sarkar” cannot do, “Sanskar” can do. Let us make cleanliness a part of our value systems, he added.

Speaking on the importance of conserving water, the Prime Minister said that in order to learn about water conservation, people should visit Porbandar in Gujarat, and see the home of Mahatma Gandhi. We need to conserve water and recycle water, he added. I appeal to my hardworking farmers to embrace drip irrigation, the Prime Minister said.

The Prime Minister said that through volunteering efforts, a lot can be done in the agriculture sector. Youngsters must venture out and work for the welfare of farmers, he added.

The Prime Minister asserted that more people are paying taxes because they have faith that their money is being used properly and for the welfare of people.

He said that India is making a mark in the start-up sector due to the talent of its youth.

Responding to a team that is working to create rural digital entrepreneurs, the Prime Minister said that it is important to create an India where everyone has equal opportunities.

The Prime Minister said doing social work should be a matter of great pride for everyone.

Expressing disagreement with the trend to criticize business and industry, the Prime Minister said that this townhall programme has illustrated how leading corporates are doing excellent social work, and urging their employees to venture out and serve the people.