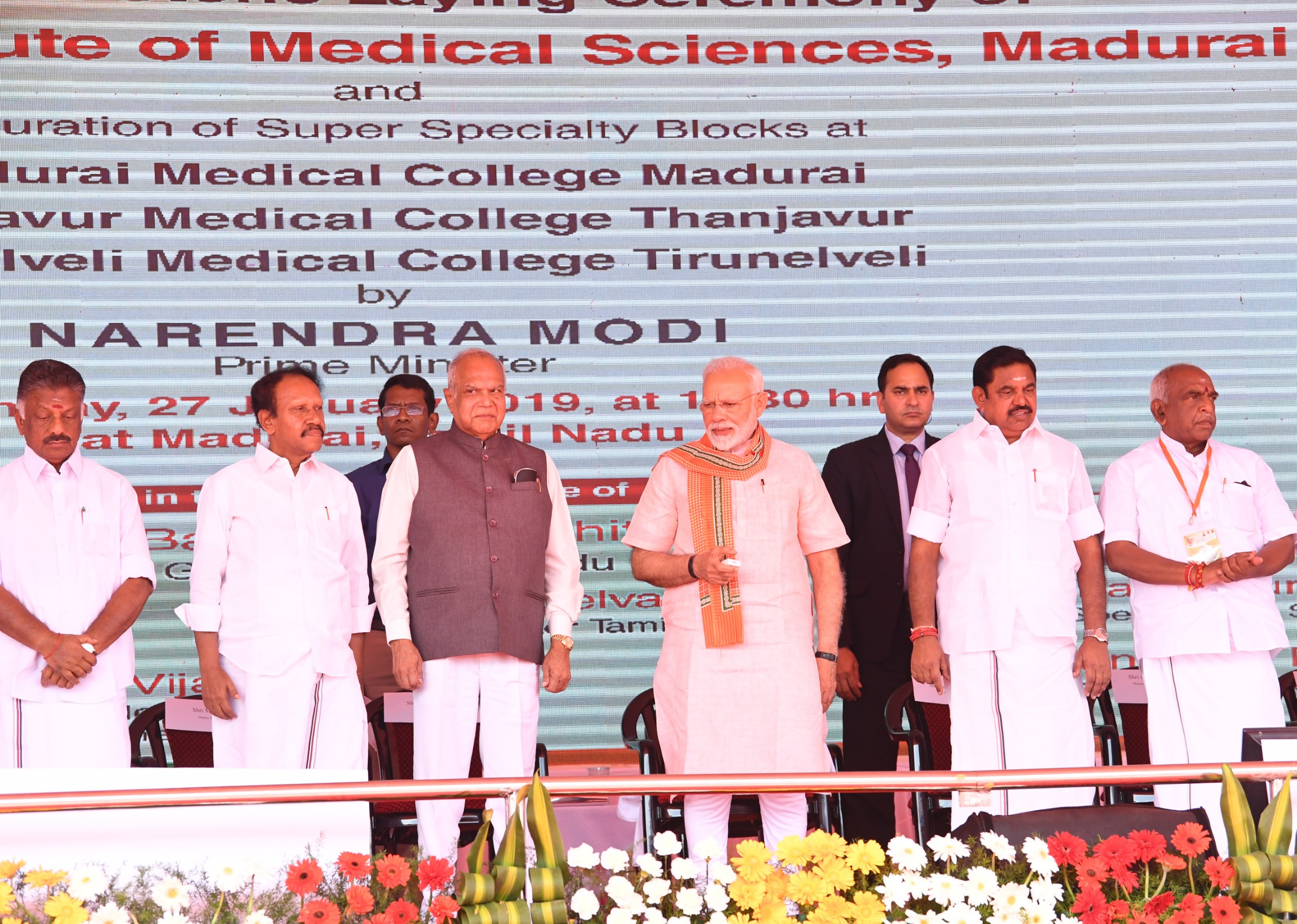 The new AIIMS will come up at Thoppur in Madurai. It will provide leadership in advanced healthcare, medical education and research in the region. This location will primarily benefit people residing in the Southern backward districts of Tamil Nadu.

Addressing a gathering in Madurai, PM said “In some ways, the laying of foundation stone of the All India Institute of Medical Sciences at Madurai today reflects our vision of Ek Bharat Shreshtha Bharat. AIIMS in Delhi has cultivated a brand name for itself in healthcare. With AIIMS in Madurai, we can say that this brand of healthcare has been taken to all corners of the country – from Kashmir to Madurai and from Guwahati to Gujarat.
AIIMS at Madurai will benefit the entire population of Tamil Nadu.”

Reiterating the emphasis of the Government on the health sector, PM said the idea is to ensure that everyone is healthy and health care is affordable. He added that,, “The speed and scale at which Mission Indra Dhanush is working is setting a new paradigm in preventive healthcare. Schemes such as Pradhan Mantri Matru Vandhana Yojana and Pradhan Mantri Surakshit Matritva Abhiyan is making Safe pregnancy a mass movement. The number of UG medical seats have been increased by 30% in the last four and half years.”

About Ayushman Bharat, he said it is a big step to ensure achievement of universal health coverage for the people. Prime Minister expressed satisfaction that 1 Crore 57 lakhs people from Tamil Nadu are covered under this scheme. PM lauded that in just over 3 months, about 89000 beneficiaries have benefited under this scheme and an amount of more than Rs. 200 Crore has been authorized for admitted patients of Tamil Nadu. He said, “I am happy to learn that Tamil Nadu has already started 1320 health and wellness centers”.

On disease control front, he said Government is committed to the elimination of Tuberculosis by 2025. PM said,, “We are providing technical and financial support to states. I am happy to learn that state government is upscaling the TB free Chennai initiative and seeking to eliminate TB in the state by 2023 itself.” He lauded the role of Tamil Nadu Government in the implementation of National TB Programme.

The Prime Minister also inaugurated 12 Post Office Passport Seva Kendras in the state. He said, “This is one more example of improving ease of living to our citizens.”

From Madurai, PM left for Kochi where he will inaugurate and lay the foundation stone of several projects related to the expansion of oil and gas sector.