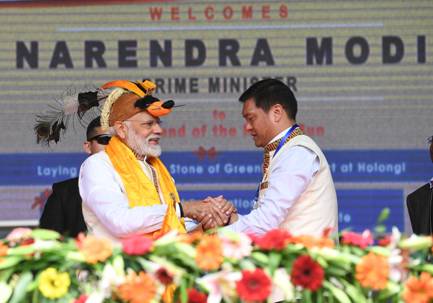 Talking about the Film and Television Institute to be developed in Jote, he said that it will not only will give new avenues and opportunities to the youngsters but will also be a boost for the expression of the culture of the State.

Speaking on the occasion, Prime Minister recounted the impact these projects will have on the lives of people of Arunachal Pradesh. He said that for the development of New India, the development of North-East is essential. He mentioned about the benefits set to accrue to the state under UdanYojna, while also highlighting other initiatives being taken to boost infrastructure in the region. He also appreciated the impact of SaubhagyaYojna in ensuring electrical connectivity for almost all the people in the State. All these steps will further boost tourism in the region, he stated. He also highlighted the benefits of PM-KISAN set to accrue to the farmers of the country, including those of the State.

DD Arunprabha is the 24th satellite channel operated by Doordarshan. It is equipped with state of the art facilities, including a Digital Satellite News Gathering unit to provide live coverage from remote locations, for 24×7 telecast. The playout facility and the earth stations established at DDK Itanagar will ensure seamless transmission of DD Arunprabha.

The channel will showcase the rich tradition and diversity of local culture. Not only will it help integrate North-East with the country, but will also bring alive the magnificence of North-East by airing content sensitive to the needs and aspirations of local population including news, travelogues, mythological shows, documentaries, magazines, tele-films, reality shows, daily shows etc.

It will provide a boost to the talented youngsters of the North-East in film and television sector. The project, to be constructed at around 20 km from Itanagar, has been approved for construction at a total estimated cost of Rs. 204.32 crore. To be executed by CPWD, it is expected that the project will be completed in 25 months’ time.