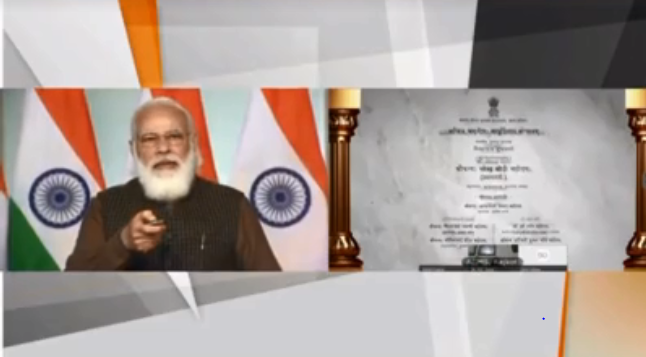 Speaking on the occasion, the Prime Minister remembered the efforts of the millions Doctors, Health Workers, Scavengers and other Frontline corona warriors who have constantly put their lives at stake to protect humanity. He lauded the efforts of the scientists and to all those who provided food to the poor in this difficult period with full dedication.

The Prime Minister remarked that this year showed that when India unites it can effectively cope up with the most difficult crisis. He said India is in a much better position as a result of the effective steps and India’s record of saving victims of Corona has been much better than other countries. He said in India, every necessary preparation about the vaccine is going on. He said that efforts are in the final stages for making the vaccine made in India, rapidly reaching every nook and corner. He said India’s preparation is in full swing, to run the World’s largest Immunization Campaign. He called to move forward together to make vaccination successful just the way last year we tried to prevent infection.

Shri Modi said AIIMS Rajkot will boost health infrastructure, medical education and provide employment opportunities in Gujarat. He said about 5 thousand direct jobs and many indirect jobs would be created. Lauding the efforts of Gujarat in fighting COVID, the Prime Minister said Gujarat has shown the path in fighting COVID. He credited the robust medical infrastructure in Gujarat, for Gujarat’s better handling of Corona Challenge. He said two decades of relentless effort, dedication and resolve is behind this success of Gujarat in the medical sector.

The Prime Minister said even after so many decades after independence in the country only 6 AIIMS were established. During Atal ji’s government in 2003, steps were taken to establish 6 more AIIMS. He added that in the last 6 years, work on 10 new AIIMS were started and many have been inaugurated. He said along with AIIMS, 20 Super Specialty Hospitals are also being constructed.

The Prime Minister emphasized that before 2014, different aspects of our health sector were working towards different directions and approaches. He said after 2014, the health sector has worked holistically and emphasis was on preventive care, while also giving priority to modern treatment facilities. He said that the Government reduced the cost of treating the poor and at the same time, also emphasized on increasing the number of doctors rapidly.

The Prime Minister said under the Ayushman Bharat scheme, the work to establish about 1.5 million Health and Wellness Center in remote areas were done and among those about 50000 centers have already started functioning. About 5 thousand among those are in Gujarat alone. He said about 7000 Jan Aushadhi Center provided medicines at low cost to about 3.5 lakh poor patients. He listed the initiatives of the Government for improving the health of the people.

The Prime Minister said that as the diseases are becoming globalised, it is time for coordinated global response for global health solutions. India has done this as a global player. India proved its mettle by adapting, evolving and expanding as per demand. India moved with the world and did value addition in the collective efforts. India is emerging as the nerve centre of global health, in 2021 we need to further strengthen this role of India, the Prime Minister added.