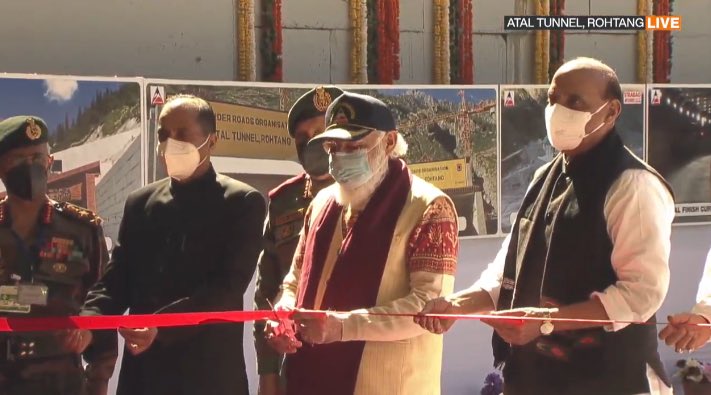 Transformative impact of the Tunnel

Prime Minister recalled going there when he used to work as a karyakarta, by traversing the long route through Rohtang, and the difficulties faced by people due to Rohtang Pass being closed in winters. He also recalled his interactions with Shri Thakur Sen Negi in those days. He said that former Prime Minister Shri Atal Bihari Vajpayee was well aware of these difficulties, which was why he announced the tunnel in the year 2000.

Prime Minister noted that through the 9 Km tunnel, a distance of about 45-46 Km has been reduced. He underlined that the lives of the people of the region are about to change due to the transformative impact of the tunnel. He said that the tunnel will prove beneficial for a spectrum of people of Lahaul-Spiti and Pangi, including the farmers, people associated with horticulture and animal rearing, students, businessmen etc. It will prevent the farm produce of the region from getting ruined, by enabling it to reach markets quickly. It will help Chandramukhi potatoes of the region reach new markets and new buyers. The tunnel will also help herbal medicinal plants and spices grown in Lahaul-Spiti reach out and make a mark worldover for the region. Further, the tunnel will negate the need of families venturing out for education of their kids, he noted.

Boost to tourism and employment opportunities

Prime Minister talked about the tremendous tourism potential of the region. He said a new dimension is now going to be added to Lahaul-Spiti as a confluence of Dev Darshan and Buddha Darshan. It will now become easier for people all over the world to access Tabo Monastery in Spiti Valley. He remarked that the entire region will become a huge centre for Buddhists from East Asia and also from other countries across the world. Increased tourism will also open up several employment opportunities for the youth, he said.

Prime Minister underlined that the Atal Tunnel symbolizes the commitment of the government to ensure that the benefits of development reach out to each and every citizen. He said that earlier, Lahaul-Spiti and several other such areas were left to fend for themselves, since these regions could not fulfil the politically selfish desires of some people. But, the country is now working with a new thinking, and policies now are not made on the basis of the number of votes, but the endeavour is to ensure that no Indian is left behind. Prime Minister noted that Lahaul-Spiti is a big example of this change, as evident in it being one of those districts where the arrangement for har ghar pipe se jal has been ensured.

Prime Minister reiterated the commitment of the government for making all basic necessary facilities available for the Dalits, the Tribals, the victims and the deprived. He listed out efforts of the government towards rural electrification, making available LPG gas connection, construction of facilities like toilets, treatment facilities through Ayushman Bharat Yojana. He ended his remarks by asking people to remain vigilant against coronavirus.

Launch of a guidebook to prepare science, technology and innovation roadmaps to achieve the Sustainable Development Goals