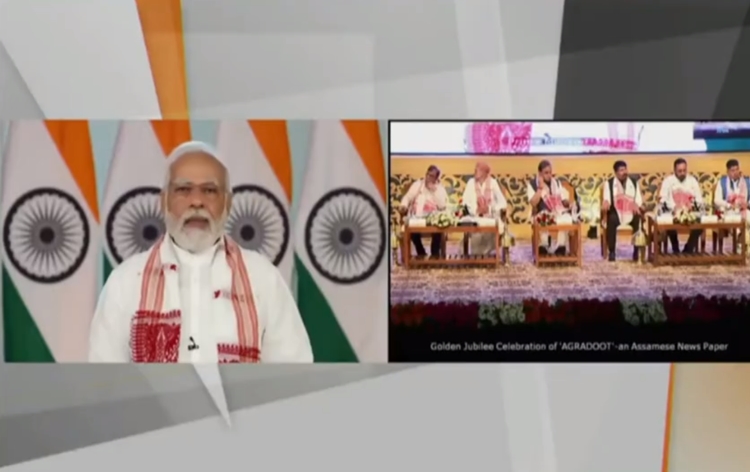 New Delhi: Prime Minister Shri Narendra Modi inaugurated the Golden Jubilee celebrations of the Agradoot group of newspapers today via video conferencing. Addressing the gathering, the Prime Minister congratulated the ‘strong voice of the Northeast in the Assamese language’ Dainik Agradoot for the occasion and complimented them for keeping the values of unity and harmony alive through the medium of journalism.

The Prime Minister empathized that for the past few days, Assam is also facing great challenges and difficulties in the form of floods. Normal life has been greatly affected in many districts of Assam. The Chief Minister and his team are working very hard day and night for relief and rescue, he said. The Prime Minister assured the people of Assam, the readers of Agradoot, that the central and state governments are working together to reduce their difficulties.

The Prime Minister said when there is dialogue, there is a solution. It is through dialogue that possibilities expand. Therefore, along with the flow of knowledge in Indian democracy, the flow of information is also flowing continuously.

The Prime Minister said the expansion of Indian languages was stopped during the long period of slavery, and in modern epistemology, research was limited to a few languages. A large section of India had no access to those languages, to that knowledge. He added that the scope of Intellect’s expertise kept shrinking. Due to this, the pool of invention and innovation has also become limited.

The Prime Minister stressed that “no Indian should be deprived of the best information, best knowledge, best skill and best opportunity just because of language, this is our effort. That’s why we encouraged studies in Indian languages in the National Policy on Education.” The Prime Minister continued on the theme of knowledge in mother tongue and said that “ it is now our endeavour to make the world’s best content available in Indian languages. For this, we are working on the national language translation mission. The effort is that the Internet, which is a huge storehouse of knowledge, and information, can be used by every Indian in his own language.” He also talked of the Bhashini Platform, a Unified Language Interface launched recently. He said it is important from every aspect, social and economic, to make the Internet available to crores of Indians in their own language.

Underlining the biodiversity and cultural richness of Assam and Northeast, the Prime Minister said Assam has a rich legacy of music and that it needs to reach the world at large. He said efforts of the last 8 years with regard to physical and digital connectivity of the region will be hugely beneficial for the tribal tradition, tourism and culture of Assam.

The Prime Minister said the positive role played by the media in campaigns like the Swachh Bharat Mission is appreciated all over the country and the world even today. Assam Chief Minister Dr. Himanta Biswa Sarma, who is the chief patron of Agradoot’s Golden jubilee celebration committee, was also present on the occasion.