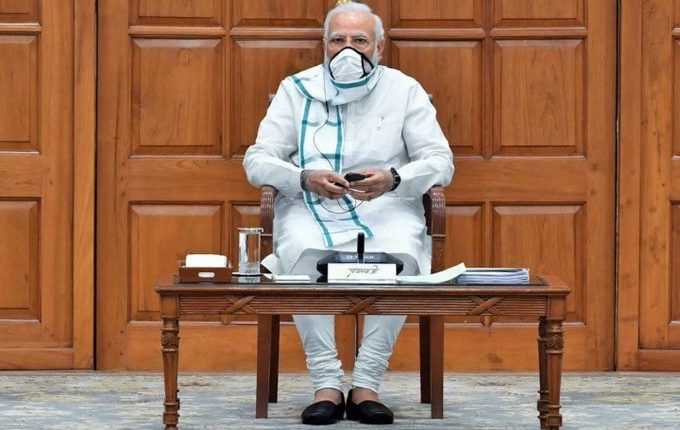 New Delhi: Prime Minister  Narendra Modi today interacted with a Group of Doctors from across the country, via video conferencing, to discuss the Covid related situation.

Prime Minister thanked the entire medical fraternity & the paramedical staff for the exemplary fight displayed by them against the extraordinary circumstances of the second wave of Covid, adding that the entire country is indebted to them. He noted that be it testing, supply of medicines or set-up of new infrastructure in record time, all these are being done at a fast pace. Several challenges of oxygen production and supply are being overcome. The steps taken by the country to augment human resources, like including MBBS students in Covid treatment, and ASHAs and Anganwadi workers in rural areas, provided extra support to the health system.

Prime Minister underlined that the strategy of starting vaccination programme with front line warriors has paid rich dividends in the second wave. About 90% of the health professionals in the country have already taken the first dose. Vaccines have ensured safety of most of the doctors.

ICC through its Cricket for Good initiative today launched a…

Prime Minister urged doctors to include oxygen audit in their daily efforts. Noting that a large number of patients are undergoing treatment in ‘home isolation’, he requested the doctors to ensure that the home based care of every patient is SOP driven. He said that telemedicine has played a big role for patients in home isolation, and this service needs to be expanded in rural areas as well. He lauded the doctors who are forming teams and providing telemedicine service in villages. He appealed to doctors across the states to form similar teams, train final year MBBS students and MBBS interns, and work towards ensuring that all tehsils and districts of the country have telemedicine service.

Prime Minister also discussed the challenge of Mucormycosis and said that doctors may need to put in extra effort towards taking active steps and spreading awareness about it. He further underscored the importance of psychological care, along with the importance of physical care. He said that continuously fighting this long battle against the virus must be mentally challenging for the medical fraternity, but the power of faith of citizens stands with them in this fight.

During the interaction, the Doctors thanked the Prime Minister for his guidance and leadership during the recent surge of cases. Doctors thanked the Prime Minister for prioritising the health care workers for vaccination. They informed the Prime Minister about their preparedness since the first wave of Covid and the challenges they faced in the second wave. The doctors shared their experiences, best practices and the innovative efforts. They informed that in the fight against Covid, every effort is also being made to take proper care of non-Covid patients. They also shared their experiences of increasing awareness among the public, including about sensitising patients against improper use of medicines.

The meeting was attended by Member (Health) NITI Aayog, Health Secretary, Pharmaceutical Secretary and other officers from PMO, Ministries and Departments of Central Government.

iednewsdesk Jun 17, 2021
In the realm of social media, anti-science views about COVID-19 align so closely with political ideology —…

University of Alberta: Incidents of serious parasitic disease on the…