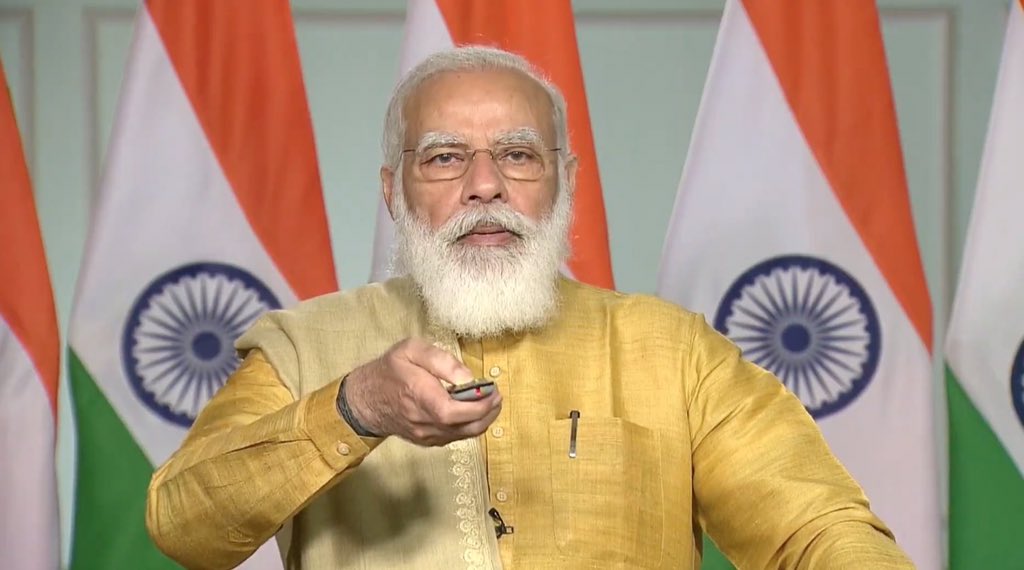 Addressing the event, the Prime Minister said tourism is also a part of the development plan of the city and countryside in Varanasi. He said this development in itself is an example of how Varanasi has gained the pace of development in every field like cleanliness of River Ganges, health services, road, infrastructure, tourism, electricity, youth, sports, farmer, etc. He announced that today, renovation of sewage treatment plant project under Ganga Action Plan has been completed. He listed the infrastructure works carried out in Varanasi like Ghats being decorated, introduction of CNG to reduce pollution, Tourist Plaza at Dashashwamedh Ghat.

The Prime Minister said these efforts towards River Ganga are also the resolve for Kashi and the path of new opportunities for Kashi. Gradually, the situation of the ghats here is improving. He said along with the cleanliness and beautification of Ganga Ghats, Sarnath is also getting a new look. He added that the light and sound programme launched today will increase the grandeur of Sarnath.

The Prime Minister announced that today, a large part of ​​Kashi is also being freed from the problem of hanging electric wires. Another phase of laying the wires underground is completed today. He said in addition, Smart LED lights will lighten and beautify the streets.

The Prime Minister stressed that the connectivity of Varanasi has always been a top priority of the Government. He said new infrastructure is being constructed so that the people of Kashi and the tourists don’t waste their time in traffic jams. He remarked the road connecting Babatpur to the city has also become a new identity of Varanasi. He termed the launch of two Passenger Boarding Bridges in Varanasi airport as necessary, since six years ago, Varanasi airport used to handle 12 flights daily which has now become 48 flights a day. He said modern infrastructure is being made in Varansi to make life easier for both the people who live here and who visit here. He listed the road infrastructure works carried out in the city of Varanasi.

The Prime Minister said for the last 6 years, unprecedented work has also been done on health infrastructure in Varanasi. Today not only UP, but in a way, it is becoming a hub of health facilities for the entire Purvanchal. He listed the health infrastructure done in the Varanasi area like modernization of Lal Bahadur Shastri Hospital in Ramnagar, etc.

The Prime Minister remarked that all-round development is happening in Varanasi today, and is benefiting the entire eastern India including Purvanchal. He said now the people of Purvanchal do not have to go to Delhi and Mumbai even for small needs.

The Prime Minister said for the farmers of Varanasi and Purvanchal, many facilities ranging from storage to transport have been created here like the center of the International Rice Institute, Milk Processing Plant, Construction of Perishable Cargo Center, etc. He said farmers are benefiting a lot from such facilities. He expressed happiness that for the first time this year, fruits, vegetables and paddy from the Varanasi region, have been exported abroad. He said a godown with storage capacity of 100 MT launched today will expand the storage facilities for farmers in Kashi. He said the multi-purpose Seed warehouse and dissemination Center has been launched in Jansa.

The Prime Minister said the village poor and the farmers are the biggest pillars of the AtmaNirbhar Bharat campaign and the biggest beneficiaries too. He said the recent agricultural reforms are going to directly benefit the farmers. He said today, under the Pradhan Mantri Swanidhi Yojana, the street vendors are getting easy loans, so that they can resume their work after the pandemic.

The Prime Minister said to provide legal rights to the people living in the village on their lands and houses, ‘Swamitva Yojana’ has been launched. He said after the issuance of property cards under this scheme, their scope for property disputes will not remain in the villages. He added now it will be easy to get a loan from the bank on the village house or land.

The Prime Minister wished the people on Diwali, Govardhan Puja and Bhaiya Dooj and urged them to promote Local for Diwali a lot and also to proudly propogate great local goods and said this will strengthen the local identity.