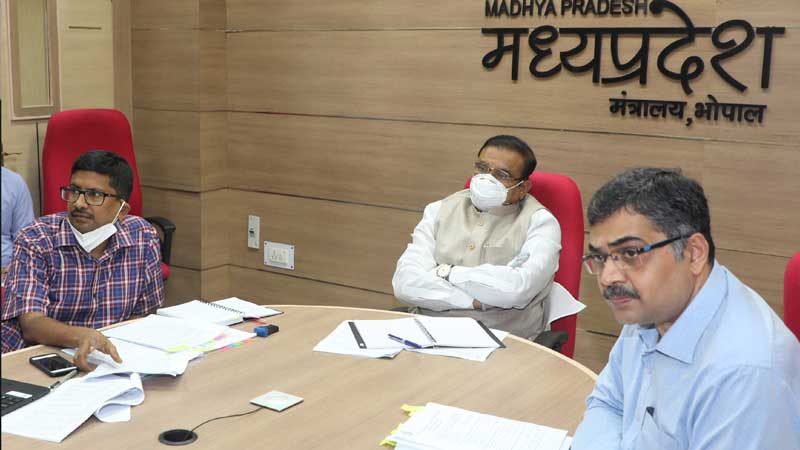 Bhopal : Prime Minister Shri Narendra Modi will start distribution of letters approved from Madhya Pradesh under Pradhan Mantri Street Vendors Atmanirbhar Nidhi (PM Swanidhi) Yojana in September. Madhya Pradesh ranks first in the country in this scheme. Urban Development and Housing Minister Shri Bhupendra Singh said this during the review of works in urban bodies. Shri Singh issued instructions to suspend the Chief Municipal Officers of Patharia and Kailaras for negligence in this scheme. On one hand, he appreciated the officers for their outstanding work in various schemes and on the other he also directed to issue show cause notices to officials concerned for not achieving targets. According to the instructions of Shri Singh, suspension orders of both the CMOs have been issued.

One lakh cases must be approved by August 31

Shri Singh said that one lakh cases of street vendors should be approved by August 31 under PM Swanidhi Yojana. He told to coordinate with the banks and seek the help of district collector if needed. Praising the bodies for good work in the scheme, Shri Singh said that other bodies must follow their example.

No excuses will work

Urban Development and Housing Minister Shri Singh said that the works of the urban bodies will be reviewed every month. He said that currently all the rights are with the officers, hence no excuses will work. Work should not remain pending at any stage. On completion of the first phase in the Pradhan Mantri Awas Yojana, the fund for the next phase should be released soon. He said that if there is no progress in the work till September 15, the amount allocated for your civic body will be transferred to the place where good work is being done.

Madhya Pradesh should be made number one in Cleanliness Mission

Shri Singh said that people should unite to make cities clean, beautiful and green to make Madhya Pradesh number one in the Swachch Survekshan-2021. He lauded the citizens, public representatives and officials of Indore and other urban bodies, which got good ranking in the Swachch Survekshan-2020. Shri Singh said that other urban bodies should take inspiration from them and perform better. He said that simply putting up banners and writing slogans will not work, field work has to be done for this. In this regard, cooperation of social workers and religious institutions must be sought. Minister Shri Singh said that ranking of cleanliness campaign will be done at the state level every month. Action will be taken if the result is not good.

Scientists from IIT Guwahati develop an automated system to…

I’m safe only because of mask

While reviewing the “Mask Ek -Zindagi Anek” campaign, Minister Shri Singh said that the civic bodies have worked for humanity along with their duty. He said that after meeting 10 Corona infected people, ‘I am still safe only because of my mask’. He said that people should be constantly motivated to wear masks. Shri Singh said that three urban bodies, which have done excellent work in “Gandagi Bharat Chhodo- Madhya Pradesh” campaign will be honoured by the Chief Minister.

Funds will be transferred elsewhere if progress is minimal

The Urban Development and Housing Minister said that progress in the activities being undertaken under AMRUT Mission is minimal. He said that if the progress of works is not increased, the fund will be transferred to other bodies. Technical problems in the work must be removed. If need arises, you may talk to the Principal Secretary, Commissioner Urban Administration and me.

While reviewing the revenue collection, Shri Singh said that without recovery of revenue, development and salary get stuck. He said that Chief Minister will honour those who make good recoveries. The dream of Atmanirbhar Bharat and Atmanirbhar Madhya Pradesh will be realized only when urban bodies also become self-reliant. In addition to increasing FAR and compounding as per the recommendations of the committee, giving rights of auctioning of unusable lands is also being considered. The lease should be renewed on priority. He informed that the urban bodies will be able to determine the property tax according to collector guidelines. This will increase the income of the urban body. Shri Singh said that development of cities sends a good message to the entire state.

Every urban body should have a park and gym

Shri Singh said that all urban bodies should have at least one park and a gym. If indoor gym is not possible, then an outdoor gym must be built. It is must for health. Plantation should be done to keep the city green. Reporting of works done is also must. Principal Secretary Urban Development and Housing Shri Nitesh Vyas, Commissioner Urban Administration and Development Shri Nikunj Kumar Shrivastava, Additional Commissioner Shri Mohit Bundas, Commissioner Municipal Corporation Bhopal Shri K.V.S. Chaudhary and other officials were present at the meeting.