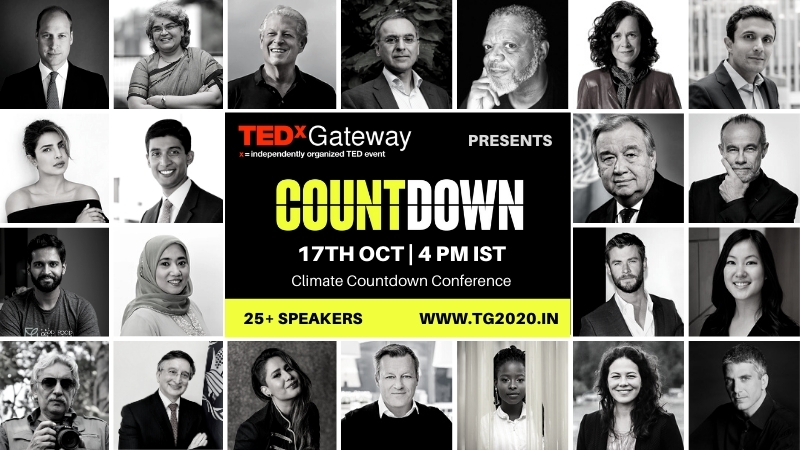 Mumbai: Acclaimed Poet and Lyricist Nirmika Singh united with visionary creators and leaders from around the world for the launch of TEDxGateway’s Countdown initiative. Best known for penning 2019’s inspiring “Marvel (Hindi) Anthem” by A.R. Rahman as well as leading her online poetry series #AurSuno, the multi-faceted creative leader has made an emotional appeal to combat climate change at the global initiative. Joining the ranks of changemakers such as Al Gore, Chris Hemsworth, Priyanka Chopra Jonas, Prince William, Pope Francis, and 25 other speakers, activists and creators, Singh showcased her ideas for saving Earth with a poem titled “Kuch Aise Badley Duniya (May The World Change In Such A Way).”

Singh envisioned a powerful portrait of the future in her rousing environmental poem — the only Hindi-language verse performance at the global Countdown event. The poet penned and performed a timely tribute to the Earth, calling its inhabitants to acknowledge and build on the little ways in which they have the potential to affect larger change, outlining a ‘worlds within worlds’ approach to make it count. Painting a picture of our native planet as it stands today, from the debilitating state of Earth’s green cover to the threat of extinction faced by endangered species, as well as the avarice of existing systems, Singh’s “Kuch Aise Badley Duniya” taps into the world’s most glaring issues to weave an urgent call to action for all of humanity.

“As a poet and a citizen of the world, I feel an urgent responsibility to make an appeal to people to act now, before it’s too late. Climate change is real and it is affecting all of us in many, different ways. The good thing is that each of one us can contribute in our small ways to make the planet a more livable space. Let us all become advocates and catalysts of change, right now, today!”

Singh, through poetry, suggests the simplest of ways in which every human being can be a climate champion; everyday changemakers in the fight to save the Earth. The poet’s performance at TEDxGateway Countdown is preceded by equally compelling showcases at 2019’s TEDxVersovaWomen in January and TEDxVersova in October wherein Singh engaged with the local community to tap into the power of self-belief and dreams.

As tuned into the present climate crisis as it is ready to honor its promise of a thriving future, Singh’s “Kuch Aise Badley Duniya” continues the poet’s tradition of celebration and resistance. No stranger to revolution, Singh has been a forthright advocate for issues that have defined and changed the course of humanity over the last decade. From Feminism and combating societal malaise to politics as well as the rights and freedoms of artists, Singh — as an individual and as a creator — continues to use her voice and art to champion change.

Nirmika Singh is a multi-faceted creative leader based in Mumbai. A renowned music critic and journalist with a decade of experience, she is also an accomplished poet and lyricist. Nirmika has to her name several collaborations with celebrated composers such as A.R. Rahman and Clinton Cerejo, among others.

A leading tastemaker and authority in India’s music and entertainment space, Nirmika brings to the table a rare combination of creative and business expertise in identifying and building strategic ties between India’s varied artistic and commercial networks.

She also leads the Hindi poetry series #AurSuno which has garnered tremendous success online, thanks to its heartwarming and inspirational themes as well as Nirmika’s signature performance style which fuses spoken word and solo theatre. The #AurSuno community on Instagram spans over 100k active fans who drive excellent engagement and conversations. This audience comprises both Gen Z and millennial followers.