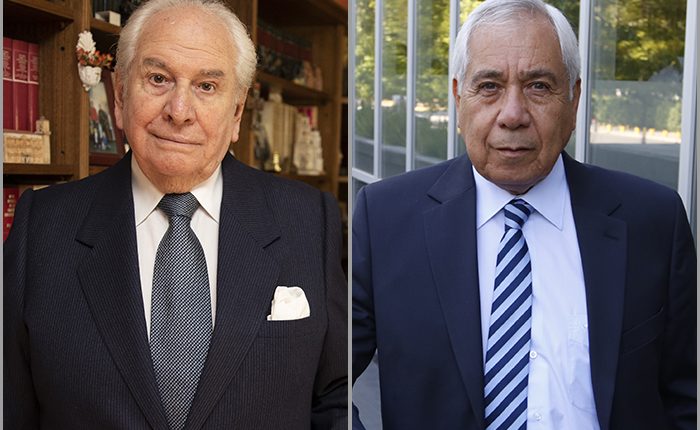 During the year 2020 and until June 2021, the Honorable Superior Council granted the honorary academic degree of professor emeritus to two outstanding academics with extensive experience in the institution. They are José Ignacio González Leiva, from the Institute of Geography, Faculty of History, Geography and Political Science, and José Luis Cea Egaña, from the Faculty of Law.

This appointment is proposed by the rector to the Honorable Superior Council at the proposal of the respective dean, on his own initiative or at the request of the director of the corresponding academic unit.

Professor González has a doctorate in Geography from the University of Barcelona, ​​Spain. As an academic at the Institute of Geography, his priority area of ​​interest is cartography. His publications refer essentially to the history of cartography, topographic and thematic cartography. He also studies electoral and urban geography.

He was dean of the Faculty of History, Geography and Political Science , for the first time, between 1993 and 2000, and then between 2006 and 2013. That same year he was elected as the first ombuds of the UC, with the responsibility of mediating in coexistence problems at the interpersonal level in the university community. After finishing his first three-year term, he was re-elected to continue serving as mediator for a new triennium

“At the moment of receiving the appointment of professor emeritus, I have nothing but words of gratitude for this recognition, in which I share with those who were my students, colleagues, professionals, administrators and authorities with whom I worked” – José Ignacio González, new professor emeritus.

Share
More than 50 years of interrupted work
“My time at the university has allowed me, first as a student and then as a teacher, to be a privileged witness of its constant growth, as well as the remarkable development it has today, moving from an essentially teaching university in the sixties of the last century, at the time of my admission, to an internationally recognized complex, at the moment of my retirement, “says the new professor emeritus, to continue:

“I had the immense fortune and honor to work in my capacity as dean, with the rectors Juan de Dios Vial, Pedro Pablo Rosso and Ignacio Sánchez, each of them possessing diverse personalities and orientations, but with one common thing that has made them distinguished in the exercise of his position, such as the fact of having always known how to maintain a line of continuity, a characteristic that is perceived and strongly valued by all of us who are part of the UC community “.

In more than 50 years of interrupted work, Professor González has witnessed the work carried out by the members that make up the university, “an invaluable wealth that was always the reason that motivated me to try to give my best to do each The institution that sheltered me is getting bigger, as well as to partially reward the appreciation and affection of my co-workers and the university “, he maintains and concludes:

“At the moment of receiving the appointment of professor emeritus, I have nothing but words of gratitude for this recognition, in which I share with those who were my students, colleagues, professionals, administrators and authorities with whom I worked during my stay at the university. , in which I was always guided as the only north to serve the country, God and the university ”.

Professor José Luis Cea is the author of more than three hundred publications, including fourteen books.
Law degree from UC and lawyer, Master in Law and Master in Political Science, and PhD in Law from the University of Wisconsin (United States). Professor of Political Law and Constitutional Law at the University of Chile and the Catholic University.

Member of the Court of Appeals of Santiago; and member lawyer, minister and later president of the Constitutional Court.

“I have lived 60 years at the Pontifical Catholic University of Chile, I feel that she has left an unforgettable mark on me” – José Luis Cea, new professor emeritus.

Queen Mary University of London: Bank of England must spell out risks of quantitative…