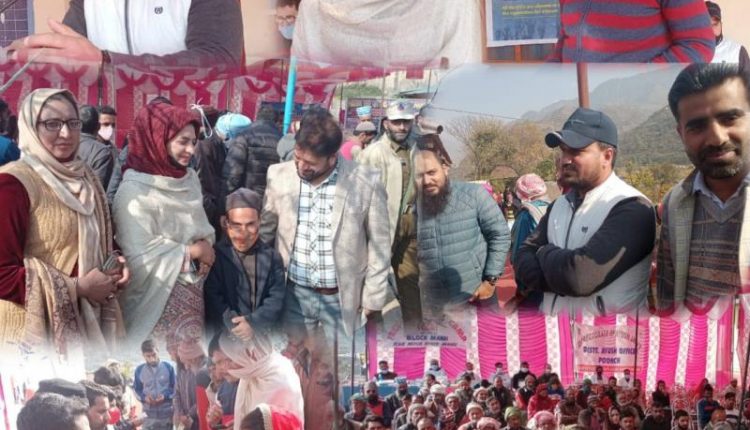 The BDC chairperson block Sathra and other PRIs besides officers from line departments also joined the programme.

The purpose of the program was to disseminate information among the workers regarding registration on e – Shram portal.

While informing the participants, Assistant Labour Commissioner, Poonch, Abid Hussain Shah briefed in detail the process of registration and various benefits after getting registered on E-sharm portal. He said that registration on the e – Shram portal will require Aadhar details, active bank account details and mobile number. He appealed to the public to register in maximum numbers to get benefits under various social security schemes.

The DDC, Chairperson, Tazim Akhter also addressed the public and asked to get more and more benefits of government schemes and livelihood. She also asked the concerned departments to organise similar awareness camps in all Panchayats. She further asked the Panches and Sarpanches to go door to door and to make people aware about the schemes so that they can avail the benefits of government schemes.

Maximum departments set up their stalls and made the people aware about the various government schemes.

Meanwhile, the locals raised demands of their respective areas and demanded Medicare facility, uninterrupted supply of water and power and other specific issues including community hall for Sathra, bridge for Fatehpur to Kinu, enhancement of disabled persons, protection wall on river bed at block Sathra, up-gradation of High School Sathra and various other developmental related issues were raised.

The officers/officials of all line departments present on the occasion noted the demands and grievances of the locals to ensure their redressal in minimum possible time.