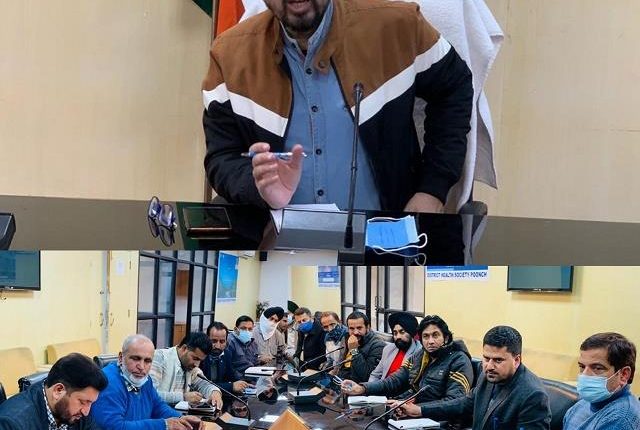 POONCH : District Administration Poonch has decided to intensify registration of unorganised workers, including those working with the government departments to enable them to avail social security schemes being provided by the Government.

In this regard, Additional District Development Commissioner, Abdul Sattar today chaired a joint meeting of government officials and civil society members to start the process on a major scale.

Assistant labour Commissioner informed the meeting that the persons eligible for registration include construction workers, MG-NERGA workers, Agricultural Workers, Horticulture workers, Gig workers connected with PHE, PWD, Irrigation and flood Control department, workers working in different shops and establishments, workers in transport sector, Civic workers, Street Vendors, Self Help Groups operating under different departments, ASHA workers, Anganwadi Workers, migrant workers etc. He further informed the meeting that the initiative of the government was aimed at covering all unorganized Workers between 16-59 Years of Age who are not a member of PF, EPFO, NPS, ESIC and not a taxpayer.

Giving further details, he said the registrations under the scheme can be done either through self registration or through CSCs by visiting the e-SHRAM portal on https://register.eshram.gov.in. The documents required for the registration on e-shram portal are Aadhaar Card, Aadhar linked active mobile number and Bank Account details. The registration on the portal is free of cost and beneficiaries will receive accidental insurance coverage through PMSBY. The workers will be paid Rs 2 lakh for accidental death and permanent disability and Rs 1 lakh for partial disability. The portal will not only provide social security benefits but will also assist the government to help all the eligible unorganised workers in case of pandemic or calamities. It will also help to keep a track record of the migrant labour workforce and will pave a path for more job opportunities.

The Additional District Development Commissioner reviewed the progress achieved so far viz a viz registration of temporary workers by the Government departments on the e-Shram portal.

The ADC said that Covid-19 Pandemic necessitated the creation of the E-Shram Portal to extend the benefits of the social security schemes to unorganized workers.

He said the district has started improvement in registration of unorganized workers on E-sharam portal but it requires further efforts to improve and to ensure 100% coverage of intended beneficiaries. The ADDC exhorted upon the concerned departments to organize camps and open facilitation counters for the speedy registration. He also called for mobilization of target sub groups.

He said that this scheme reflects the intent of the government to extend the concept of Universal Basic Income by implementing social security schemes. Under this the workers will get an e-shram card which has a twelve digit UAN number.

The ADDC directed ALC and District Manager CSCs to chart out a detailed action plan to intensify registration process by involving all stakeholders within a week’s time. He solicited support from Bopar Mundal, civil society members and from social activists to extend support for this noble cause. On the occasion the representative from Beopar Mandal promised their full support for the cause.

Transformative reforms in the higher education system can be…

Transformative reforms in the higher education system can be created under NEP-2020:…

Transformative reforms in the higher education system can be created under…

DC Srinagar reviews progress of land acquisition in construction of…