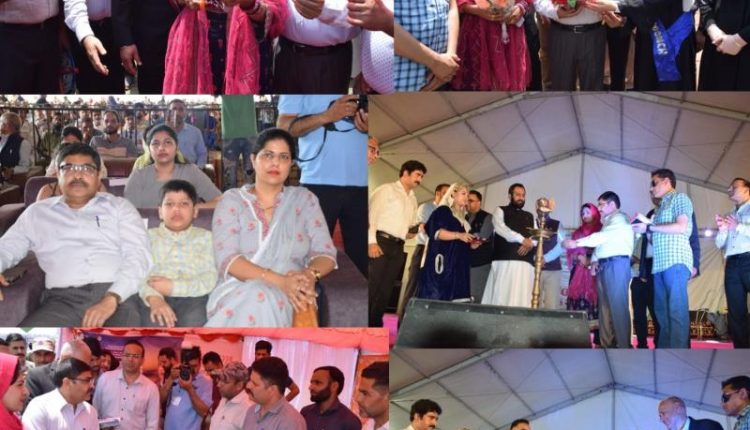 POONCH : Two day Poonch Cultural and craft festival organized by J&K Academy of Art, Culture and Languages in association with District Administration Poonch started with a grand opening as the inaugural day events attracted scores of people from different parts of J&K.

The Department of Culture, Government of India, has left no stone unturned for the promotion of the rich cultural heritage of the country.

Speaking on the occasion, Chairperson District Development Council Poonch Tazem Akhtert said that this kind of festival provides a great opportunity to the local artisans to exhibit their talent and also offers avenues for their income by selling their artifacts besides disseminating information regarding local art, craft, culture and legacy. She further thanked Prime Minister of India Narendra Modi and Lieutenant Governor of Union Territory of Jammu and Kashmir Manoj Sinha for taking this cultural initiative through J&K Academy of Art, Culture and Languages.

Additional Secretary JKAACL Sanjeev Rana, who was the man behind the successful start of the festival, said the Academy will continue to come up with similar kind of events from time to time to promote and conserve the rich cultural heritage of Jammu and Kashmir. He said the festival also nurtures the talent of local artists and provides them a platform to showcase their talent. He further complimented his team for the grand success on the day one of Poonch Cultural and Craft Festival.

Local folk music and dance forms were displayed during the festival to spread cross-cultural awareness amongst the audiences and the locals. Since food has been an integral part of any festive celebration in the region, the local cuisine was also promoted via multiple food stalls — operated by the locals on payment basis. The festival was streamed live on the youtube channel of JKAACL.

After Princeton graduation, ROTC students are commissioned as U.S.…