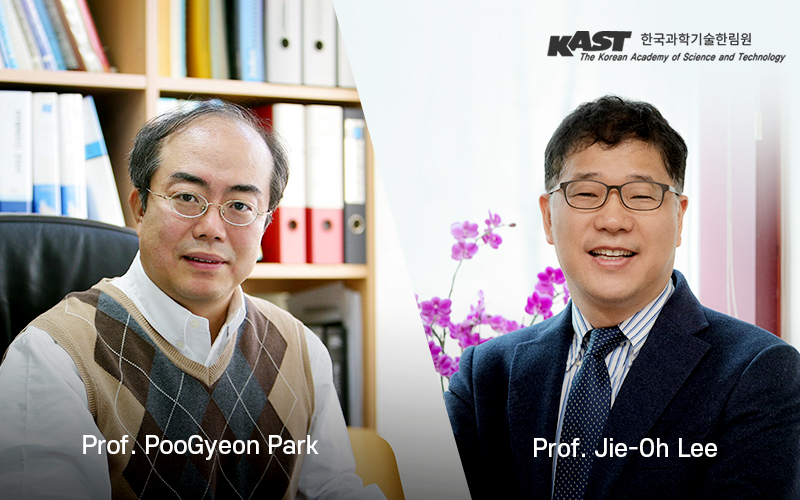 POSTECH professors PooGyeon Park of Department of Electrical Engineering and Jie-Oh Lee of Department of Life Sciences have been appointed as members in the Korean Academy of Science and Technology (KAST), the nation’s premier academic institute in science and technology.

Inducted as a member in the Engineering Division of KAST, Professor PooGyeon Park was recognized for his outstanding research results on the study of time delay caused by the limitation of transmission speed in wired and wireless systems. He also proposed a meaningful numerical approach for the first time which opened the way for research in applying the robust control-based theory on optimization techniques. In particular, he was highly praised for providing a theoretical background for interpreting and designing control systems in industrial workplaces.

In the Science Division, Professor Jie-Oh Lee was acknowledged for studying the combination of TLR receptors and microbial molecules, which play a key role in causing immune responses. Professor Lee revealed how new drug candidates for curing sepsis suppress the activity of TLR receptors and published exceptional research results, including the discovery of the mechanism by which microbial infectious agents disrupt our immune system for the first time through a protein complex structure study. With these accomplishments, he was credited with contributing to the scientific development of Korea and playing a major role in fostering the next generation.

The National Academy of Science and Technology (KAST) is the nation’s most prestigious academic institute in science and technology fields. It selects scientists and engineers who have been active for more than 20 years that have obtained pioneering research achievements and contributed to the development of their field through three rigorous screening stages. A total of 30 new inductees were selected for the year 2021 at the 2020 1st General Assembly on November 26, 2020.

Smaller test tubes for COVID-19 testing at the University of Illinois Urbana-Champaign.