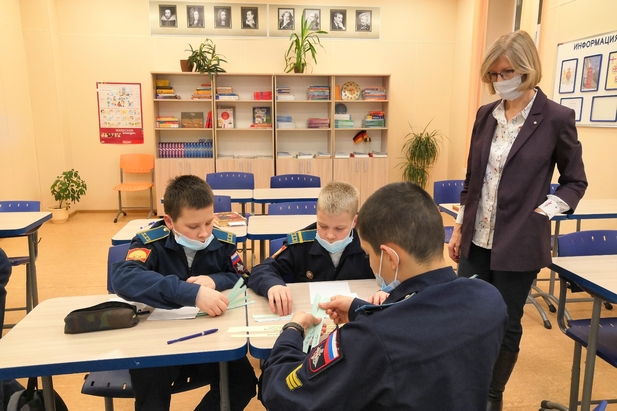 PPKU Science Week: master classes from teachers of the Institute of Foreign Languages

The topic of the master class was the strategy of writing letters. PPKU cadets got acquainted with the etymology of the German term “Brief”, structure, architectonics and composition of the text type “personal letter”. The lesson took place in the form of continuous interaction in German and Russian. The cadets were interested in such questions as: Is it possible to include verses in the text of the letter? How do I specify the address of the sender and recipient? Can a letter be addressed to a non-existent addressee?

At the master class, game tasks were proposed to correlate the individual stages of writing a letter with the accepted speech formulas in German. The competitive spirit helped to solve all the proposed tests quickly enough. In conclusion, the guys were asked to write a letter to potential friends in Germany. This stage of the master class caused excitement and questions, when answers can be received, is it possible to indicate your email addresses in the text of the letter, will there be a continuation / next master class on a similar topic?

The master classes “Mit freundlichen Grüßen” are the first stage of the project of the same name, which involves the activation of writing and speaking foreign language skills on the basis of an activity approach: schoolchildren and students from Petrozavodsk enter into correspondence with their peers from Germany.

IA Kotyurova and N.S. Barymova jointly developed through the Kahoot application an interactive game “Pot, colander, jack, subway – where did it all come from, or what foreign languages ​​do I speak?”, The purpose of which is to show that German and French is not as complex and incomprehensible as it seems at first glance, and that many words and expressions from these languages ​​have long been included in the Russian language.

The educational game was noisy and fun. The cadets showed genuine interest and followed the game with enthusiasm. The winning team was determined by the number of points scored. The Goethe-Institut Resource Center and the French Language Resource Center, established at the Institute of Foreign Languages, prepared prizes for the winners, and souvenirs for all participants.