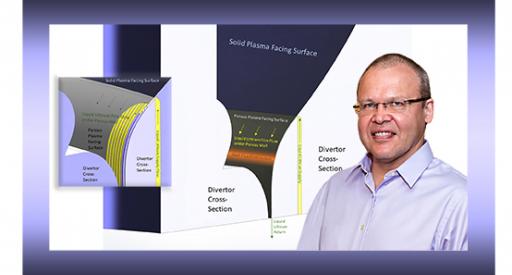 PPPL: Swiss-cheese design could help scientists harness the power of the sun

The big holes in Swiss cheese help make it a tasty treat. Now, scientists at the U.S. Department of Energy’s (DOE) Princeton Plasma Physics Laboratory (PPPL) are adding tiny, Swiss-cheese-type holes to components to improve the process of bringing to Earth the fusion(link is external) energy that powers the sun and stars.

New computer simulations show that placing the holes — porous, sponge-like covers that cap off reservoirs of liquid lithium — around the inner walls of doughnut-shaped tokamak(link is external) fusion facilities can absorb damaging excess heat inside the facilities. The heat can then be moved to generators to help produce electricity.

Fusion combines light elements in the form of plasma — the hot, charged state of matter composed of electrons and atomic nuclei — and generates huge amounts of energy. Scientists are seeking to replicate fusion reactions on Earth for a virtually inexhaustible supply of power to generate electricity.

“This is a system that could allow the harvesting of heat from the plasma,” said PPPL senior engineering analyst Andrei Khodak, lead author of a paper(link is external) reporting the results in Nuclear Materials and Energy. “You can remove the energy using the liquid metal, which acts like a heat sponge. Then you can deliver the heat to a generator or other energy-converting device that converts it to electricity.”

This novel design is both simple and effective, Khodak said. “You don’t need any moving parts. You just have to deliver an electric current through a channel beneath the holes.” The current produces a magnetic field that moves the lithium through the holes to the surface, he said.

The novel concept involves designing tokamaks in a new way. “Colleagues in Europe had come up with a 3D-printed porous material that had large reservoir spaces underneath the surface,” said Rajesh Maingi, PPPL’s Head of Boundary Physics and Deputy Head of the NSTX-U Science Department. “Andrei’s innovation was realizing that you can use those large spaces not simply as reservoirs, but also as a coolant channel when lined up in the proper direction. Andrei then came up with the idea to use liquid lithium as both the coolant and the material that oozes up to the surface, so one material plays two roles.”

The design of the porous wall concept relied on computer simulations. “You can call it ‘virtual engineering’,” Khodak said. “We actually do a lot of this simulation work in PPPL’s engineering department. Since fusion devices are expensive and complicated, you can’t test a lot of prototypes and then settle on a final version. You basically just build one or two devices. The only way to test them is virtually.”

Khodak and Maingi are now exploring whether 3D printing can create the porous wall more easily and precisely. “There is a program in the Department of Energy’s Fusion Energy Sciences division that is devoted to liquid metal concepts,” Khodak said. “After we finish optimizing, the next step will be to build a prototype and do some testing.”