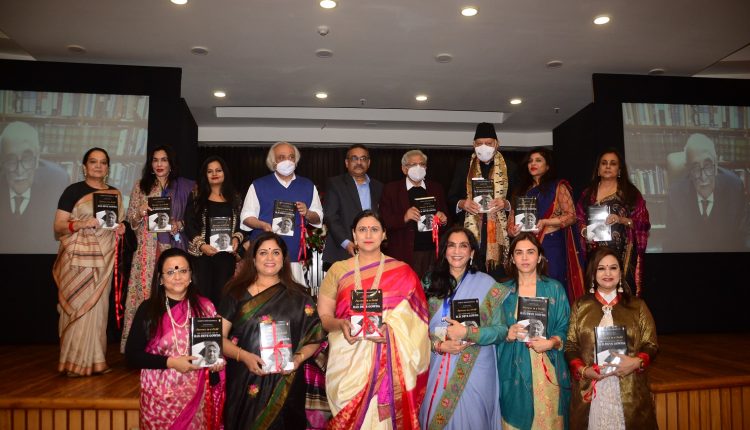 New Delhi: The Prabha Khaitan Foundation, which is organizing a five-day long book festival from 13th to 17th December at India International Centre surrounding the launching of books named Kitaab Festival, kickstarted the first day of the festival with the launch of its first biography titled “Furrows in a Field’ published by Penguin Random House India on the former Prime Minister of India H D Deve Gowda by Sugata Srinivasaraju in the presence of Mr. Deve Gowda himself.
An august gathering comprising politician and chairman of Jammu & Kashmir National Conference and former chief minister, J&K, – Farooq Abdullah; politician and leader of the Communist Party of India, and a member of the Politburo of the Communist Party of India – Sitaram Yechury; and economist, historian and politician and MP, Indian National Congress – Jairam Ramesh shared their views about Mr Gowda amid a discerning audience.
Before the three stellar personalities spoke on stage and the author shared why he chose his subject to pen a biography, the internationally recognized jurist and senior advocate, Supreme Court of India Fali Sam Nariman paid glowing tributes to the former prime minister. “My wife and I always believed that Mr Gowda not ony has a good head but a great heart as well,” he said. “For him, it has been a mixed bag of victories and defeats, of accolades and criticism, but as a statesman and diplomat, he remains unscathed and untarnished.”
Farooq Abdullah said some deeply moving words about Mr Deve Gowda, and said that he wants people to remember “how human he is.” He recalled meeting him several times when, “Mr Gowda decided to visit Kashmir during some very difficult times. He wanted to make a new beginning and find a way forward. He asked me, “Will you take part in the elections? And so we stared to bring closer and not to push them away further.”
On the occasion, Author Sugata Srinivasaraju in his address said, “When I started working on this book, in early 2019, people scoffed at me. They asked does Mr. Gowda deserves a Penguin biography? What has he really done? Is there enough to fill up the pages? Now at the end of 2021, when they hold a 600 page book, they say this is a ‘rehabilitation’ of his legacy. I am glad that they now realise that he has a legacy, but I have to often correct them by saying that this book project is not about ‘rehabilitating’ anybody but about restoring the balance.”
He further added, Mr Gowda’s democratic engagement was stellar and deep. This should have been celebrated in our democracy, but we did not seem to care. And our moment of introspection stares at us now, in 2021, when the din of our democracy being threatened has reached a crescendo. We sometime ignore certain people, certain moments and context in history at our own peril.

Sitaram Yechury who also had finished reading the 600-word book said, “ There’s very little to add to what all already been said about Mr. Gowda, but none of us were aware of his caste. He also praised the writer for his deep insight into political discussions that took pave when with the approval of the Congress and CPI(M), the sitting Chief Minister of Karnataka, H. D. Deve Gowda, was asked to head the coalition as Prime Minister after V. P. Singh and Jyoti Basu declined. He had not even completed 3 years of his chief ministership. But he told Mr Basu, “We need to save India together.”

Jairam Ramesh called the book “an admirable biography and a first rate biography based on rich history.” He said that to write a biography in a subject’s lifetime is very difficult, and addressed Mr. Gowda as ‘Politics Jeevi for his engagement with politics for 60 years. Generally, biographies are judgmental – they are either hagiographies or full of criticism. But very few of them are Prashthis or charitas in the truest sense of the term. It’s a narrative biography.”
The book release was followed by a conversation with Author Sugata Srinivasaraju, Milee Ashwarya, Publisher, Ebury Publishing and Vintage, Penguin Random House India and the session was moderated by Praneet Bubber- Ehsaas women of Amritsar