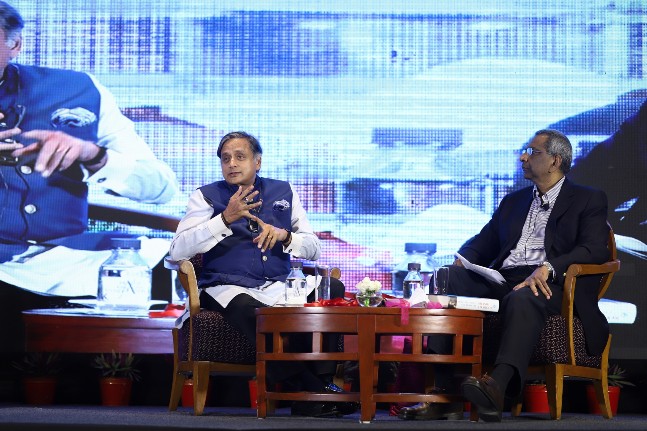 • The book was launched by Dr. Shashi Tharoor along with Mr David Davidar, Mr. Kapish of Mehra of Rupa & Co., and the Ehsaas Women of Delhi and NCR • Pride, Prejudice and Punditry marks the culmination of over fifty years of Dr. Tharoor’s writings • Dr. Tharoor recited two of his poems from his book: one of which he wrote a few months after the tragic and premature passing of his wife, Sunanda Pushkar and its called “Sunanda Now Gone”

New Delhi: ‘Kitaab’, an initiative of Prabha Khaitan Foundation, organized the launch of the book Pride, Prejudice and Punditry by Shashi Tharoor. The book launch event was held at ITC Maurya, New Delhi. The event was presented by Shree Cement Limited. The book has been published by Aleph Book Company. At the event Shashi Tharoor was in conversation with novelist David Davidar.

About the initiative “Kitaab”: The birth of a book always calls for celebration! Kitaab is the Foundation’s initiative that provides stage to authors to showcase their artistic literary work before an insightful and discerning audience and media through elegantly organized book launches. Earlier the Foundation, through this initiative, has launched books written by Sir Jeffrey Archer, Anupam Kher, Vikram Sampath, Prem Prakash, Sujata Prasad, Justice Rohinton Fali Nariman, Sudha Murty and many other notable authors all over India and abroad.

Event: The event started with felicitation of Dr. Shashi Tharoor. He was felicitated by Shinjini Kulkarni, Ehsaas Woman Noida. Following this the book was launched by Mr. Shashi Tharoor along with Mr David Davidar, Mr. Kapish of Mehra of Rupa & Co., and the Ehsaas Women of Delhi and NCR.

In conversation with Mr. Tharoor, David Davidar said “Pride, Prejudice and Punditry” marks the culmination of over fifty years of Dr. Tharoor’s writings. The idea behind the conversation was to try and unearth all the stories behind the selections in his book. There are over seventy selections in the book which range from fiction to non-fiction; politics to history.

Dr. Tharoor spoke on developing his reading and writing habit from a very young age, and what effect they had on him and how he published his first short story at the age of ten. He spoke on how his parents were an influential figure in shaping him and his qualities in his young age and as a person. At a young age he was asthmatic and due to this he was confined very often to his bed; struggling to breathe, and couldn’t go out and play with his friends. Also, he grew up in an India without television and computers, so the only escape he had was books and ultimately reading became his entertainment and education.

On being asked about what his advice he would give to an aspiring young writer as he notoriously has a reputation of someone who uses big and unfamiliar words in his writings; Dr Tharoor advised: one needs to know why he/she is writing as one’s writing is presumably to communicate to people, and try as far as possible to use words which conveys your message to people.

He also mentioned that his reputation of using big words comes in particular because of one incident where he reacted in fury saying this is a farrago of misrepresentations and outright lies.

On his political career and what made him to get into politics, Dr. Tharoor said, making money was never a motivation for him and looking at things like investment and profit just did not interest him. Matters going on in India were what interested him the most. He got into both the IIMs and but he turned them down to go off and study international relations. So, somewhat to his surprise when the Congress party offered him a ticket to contest for elections, he didn’t even hesitate for a minute.

On Hinduism and practicing it he said, while finding his own truth he realized first of all that Hinduism believes your truth is within yourself, and you don’t seek the truth outside. And also, he realized that the very idea of a personal truth admits the possibility of other truths. Hinduism to him is a uniquely faith which says essentially that all ways of looking towards the divine is equally valid.

Towards the end of the conversation Dr. Tharoor recited two of his poems from his book, one of which he wrote a few months after the tragic and premature passing of his wife, Sunanda Pushkar and its called “Sunanda Now Gone”

About Prabha Khaitan Foundation (PKF): PKF is is a non-profit trust founded by the author, poet, entrepreneur and philanthropist Late Dr. Prabha Khaitan in the early 1980s. The Foundation is dedicated to promote performing arts, culture, education, literature, gender equality and women’s empowerment. It collaborates with caregivers, committed individuals and like-minded institutions to implement cultural, educational, literary and social welfare projects in India.

Ehsaas – Women Of India: The founder of the organisation, Late Dr. Prabha Khaitan, was actively involved in initiatives that further the cause of women empowerment, be it one’s sense of self-worth, the ability to determine their own choices or their right to influence social change. Born out of the Foundation’s focus on women’s empowerment, Ehsaas is a conglomeration of women from various walks of life across India, who work for the betterment of society and inspire others to do the same. The Foundation believes that the women of today are the catalyst for change tomorrow.

About the Book – Pride, Prejudice, and Punditry brings together the very best fiction, non-fiction, and poetry from his published books and journalism—as well as many pieces that have been written specially for this volume.

There are ten sections in the book, each devoted to a particular topic. ‘In the Company of Giants’ looks at some of the most important figures of modern Indian history; ‘Into the Maelstrom of Indian Politics’ contains work on the Indian political scene; ‘Our Unruly World’ covers international relations and diplomacy; ‘The Hindu Way’ examines various aspects of the faith; ‘Musings of a Cricket Tragic’ includes some of his finest writing on the sport; ‘You Cannot Be Serious!’ is a light-hearted take on sundry matters; ‘Fragments of an Autobiography’ has poignant essays about his parents and an evocative look at his Kerala heritage; ‘The Spoken Word’ is a selection of his most famous speeches; ‘The Writerly Life’ comprises ruminations on writing and writers; and ‘Selected Fiction and Poetry’ showcases his masterpieces of fiction and poetry.

This book will give those new to the author’s work a panoramic view of the range and depth of his writing. Long-time fans will find fresh material to delight them as also ageless pieces that continue to enchant. Dazzling, inventive, and exuberant, Pride, Prejudice, and Punditry presents readers with the essential work of a literary genius.

About the Author – Shashi Tharoor is the bestselling author of over twenty books, both fiction and non-fiction, besides being a noted critic and columnist. His books include The Great Indian Novel, India: From Midnight to the Millennium and Beyond, An Era of Darkness: The British Empire in India, The New World Disorder and the Indian Imperative (co-authored with Samir Saran), The Paradoxical Prime Minister: Narendra Modi and His India, The Hindu Way: An Introduction to Hinduism, and, most recently, The Battle of Belonging: On Nationalism, Patriotism, and What It Means to Be Indian.

He was a former Under Secretary-General of the United Nations and a former Minister of State for Human Resource Development and Minister of State for External Affairs in the Government of India. In his third term, he is the longest-serving member of the Lok Sabha from Thiruvananthapuram and chairs Parliament’s Standing Committee on Information Technology. He has won numerous literary awards, including the Sahitya Akademi Award, the Ramnath Goenka Award for Excellence in Books (non-fiction), the Commonwealth Writers’ Prize, and the Crossword Lifetime Achievement Award. He was honoured as New Age Politician of the Year by NDTV in 2010 and won the Pravasi Bharatiya Samman, India’s highest honour for overseas Indians, in 2004.