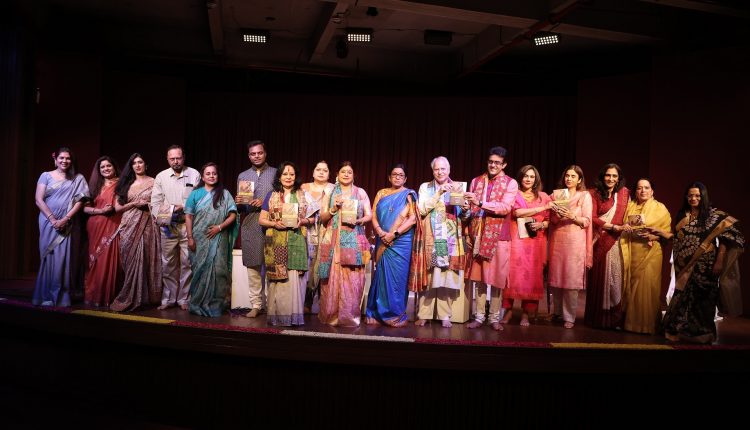 Before releasing the book there was a panel discussion with the author Dr Vikram Sampath, Malini Awasthi and Sajan Mishra. The legendary singer Gauhar Jaan, who was the first recorded artiste of India in 1902, was a gramophone celebrity but has been relegated to the page of history without much acknowledgment of her huge influence on society. She along with many other tawaifs of her ilk had played a significant role during India’s freedom movement too.

All the panelists also paid a tribute to Anshuman Pandey who set an example as the most perfect public relations associate, building lifelong relationships with umpteen artistes during his lifespan, and was also one of the translators of the book.

Sampath answered an inquisitive query made by the moderator Sinjini Kulkarni about the meaning of the word ‘tawaif,’ which is almost invariably misinterpreted by the general public. Explaining in detail about the myth associated with the negative connotation of a tawaif’s contribution to society, he explained that tawaifs “came from a tradition of families and enjoyed a hierarchy, just the way it exists even today in every sphere of life. The uppermost echelon of tawaifs was entrusted with the responsibility of teaching adab (etiquette), kaayda (manners) to the kings and young princes. They would also familiarize the royalty with the subtle finer nuances of poetry, music, dance and literature,” he elucidated. He also clarified that tawaifs were the first empowered women in India who also were first women tax payers.

Sajan Mishra sid, “Sampathji has given a new life to Gauhar Jaanji, and I thank Prabha Khaitan Foundation for such a noble thought. She earned the dubious epithet of a tawaif but I salute such a tawaif with all my heart.” He also shared his family’s 300 year old tradition of singing khayal music.

Malini Awasthi described how Gauhar Jaan was perhaps the first woman artiste who established herself on her own in a male dominated world. “In the guise of the life of a singer, the book is a history of riyasat, history of music and the account of such a brilliant singer. I felt the book gives a lot of important advice to any reader just the way my gurus imparted such nuggets to me during my training. Though her repertoire is available on Youtube for all to cherish, what one gets in the book is virtually unknown to nearly all of us. One also gets a rare glimpse of the guru shishya tradition of India.”

Translator Anshuman Jain in his message said,”Translation is a process that makes us ignore any language, culture and helps us focus and highlight the human element. It is also believed that any translation of a work of art gives a new lease of life to creativity. I am glad that for the benefit of our Hindi readers we were able to dwell on the incredible life of Gauhar Jaan who happens to be one of the prides of our country. “

Ehsaas woman of Delhi Neelima Dalmia Adhar said, “It’s a proud privilege for Prabha Khaitan Foundation; Ehsaas to be launching the Hindi translation of Vikram Sampat’s book, My Name is Gauhar Jaan. To be able to dip into the pages of history of a bygone era and read the story of the forgotten queen of melody who was the first to record a song for HMV in spite of the arduous struggles she faced in her journey with all the odds stacked against her. Another great achievement by Vikram Sampat whose literary genius has notched up another lofty benchmark.”

Based in Kolkata, The Foundation collaborates with caregivers, committed individuals and like-minded institutions to implement cultural, educational, literary and social welfare projects in India.

University of Sydney: Many Australian medical researchers not declaring conflicts…

iednewsdesk Apr 15, 2022
Many Australian medical researchers are not accurately disclosing payments from pharmaceutical companies, a study…

University of Sydney: Partnership encourages innovation in how…

University of Sydney: Masters players committed to the team, ignore…

University of Sydney: Pandemic response led to a drop in Australian…

University of Sydney: Biodigester to convert waste into compost at…