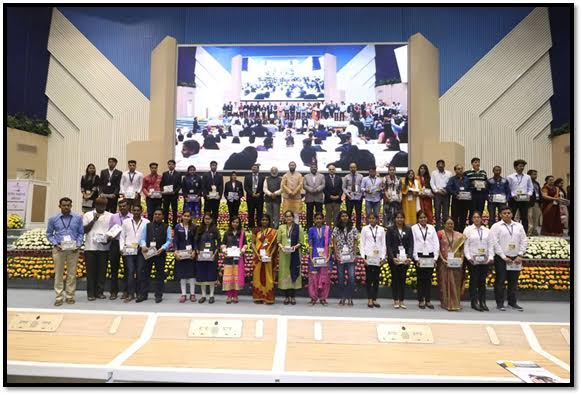 The nascent seeds of the Campaign -VISAKA may be traced to Honorable Prime Minister Shri. Narender Modi’s address to the nation in his Mann ki Baat(broadcast on 27th November 2016) where he had urged the youth of India to create digital payments awareness among masses. Taking cue from it,, Mr. Prakash Javadekar decided to launch National Digital Financial Literacy Campaign involving the higher education institutions of India .Thus, VISAKA (Vittya Saksharta Abhiyaan) was launched with the aim to actively engage the youth and students of the higher education institutions of India to motivate and encourage all payers and payee, to use digitally enabled cashless economic system for transfer of funds. The campaign commenced on December 12, 2016 and concluded on February 12, 2017.

The National Convention was, thus, organized as the culmination of the campaign and to facilitate and acknowledge the commendable work done by student volunteers from all over India and to motivate the future volunteers.

Addressing the student volunteers, Mr. Prakash Javadekar spoke about the vision of Prime Minister Shri. Narender Modi’s vision of making India a less cash society a reality. He also whole heartedly applauded and discussed the role of the today’s youth in bringing about this economic revolution. He said “that nearly 4.30 lakh volunteers had registered and they had “enlightened” nearly 19.34 lakh people in using digital modes of payments.”

Over 400 successful student volunteers, awardees and other representatives of the institutions including principals, vice-principal, directors, chancellors and vice chancellors and faculty members attended the Convention.

The VISAKA campaign at Amity Institute of Education was spearheaded by Preeti Gambhir and Shikha Ahuja (B-Ed trainee 2nd year). Whatsapp Group was made especially for this purpose and the information on how to become volunteers for this campaign was shared with the help of step by step snapshots of the process.
The first few volunteers from the institute included
1. Preeti Gambhir
2. Shikha Ahuja
3. Aditi Mukhi
4. Shreya Arora
5. Mehak
6. Gargi
7. Anannya
8. Annapurna