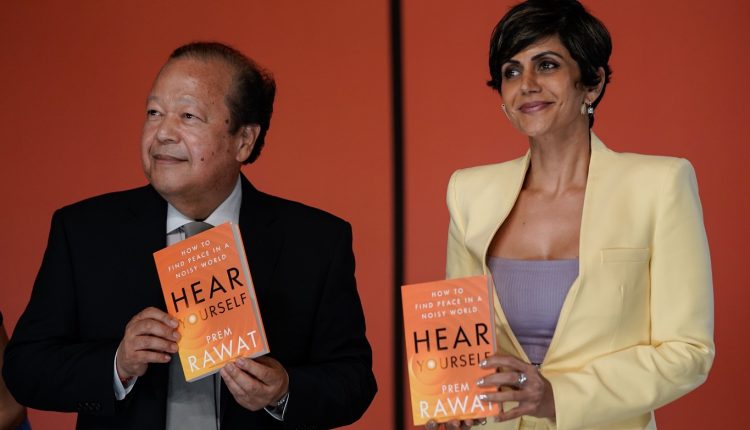 Prem Rawat book “Hear Yourself: How to find peace in a noisy world” launched

Mumbai -Prem Rawat was in Mumbai to appear at the author event of his book “Hear Yourself: How to find peace in a noisy world” for the Indian sub-continent, held at Tata Theater, National Centre for Performing Arts. This book unveiling event, organized by Harper Collins India in association with TimelessToday was attended by dignitaries, intellectuals, celebrities, and individuals from all walks of life.

In his address to the audience Prem Rawat said that, people have tried so many things for a very long time but peace still remains an enigma. Peace is something to be found inside. He also said that being alive is not an ordinary thing. Human being is the union of the finite and the infinite. He explained that life is limited hence we need to enjoy every moment. It is the enjoyment and appreciation that we can carry when we are gone. As a human being we have more wisdom than we realize. We need to uncover the wisdom and the potential that we already have. To find peace, one needs to leave the world of believing and enter the world of knowing.

Prem talked about the peace education programme running in prisons across the world and how it has changed the lives of inmates. He explained how the inmates have realized that instead of blaming others they have a choice to change themselves.

When asked by the event hostess Mandira Bedi about the Hear Yourself book, Prem said that the book is not a tutorial, it is something to help one discover one’s own potential of understanding and appreciating life.

While answering a question from a participant, he suggested that when things get tough, “go hear yourself”.

At the end, when asked by RJ Archana about his mantra, he said, “I close my mouth; I close my mind and I open my heart”.

The book was earlier released in the United States in September last year and immediately became the New York Times best-seller. The book is also available in several other languages including French, Spanish, Italian, and Portuguese.

The noise of modern life can be deafening, leaving us feeling stressed and uneasy. In this warm and wise book, Prem Rawat teaches us to lower the volume of the noise and “learn to listen to ourselves”. Through the book, Prem Rawat provides guidance on the journey to quieten the noise of busy modern lives so we can hear our own unique, authentic voice – the source of peace within us.

After speaking to hundreds of millions of people in more than 100 countries over the last five decades, Prem Rawat known as an ambassador of peace, offers to the readers a unique message, valuable knowledge and inspiring stories in his book Hear Yourself. The book is brought to life through ageless stories of ancient and modern origin. Mr. Rawat also writes about his interactions with extraordinary people – from religious luminaries, political leaders to prisoners in some of the world’s high security prisons and people from all walks of life, that he came across during his extensive travels around the globe.

India Education Diary Bureau Admin Apr 30, 2022
Susan and Gary Rothwell have been awarded an honorary doctorate by the University of Sydney in recognition of…