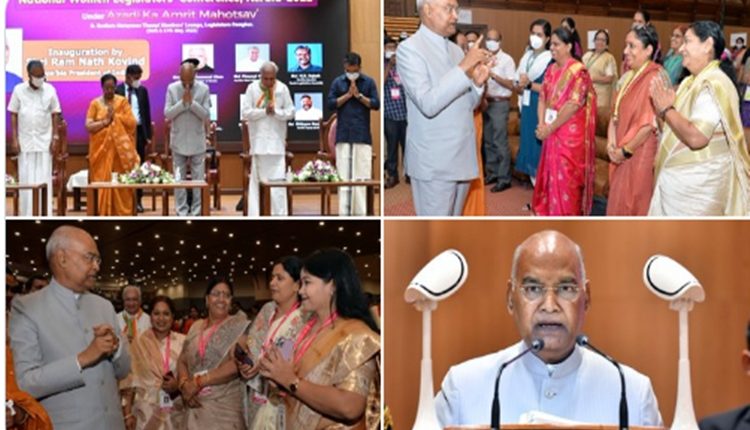 New Delhi: President Ram Nath Kovind has recalled the inspiring contributions of women who made the relentless fight for liberation from colonialism and said that India’s freedom struggle has laid the foundation for gender equality in the country.

The President was addressing the national conference of woman legislators in Thiruvananthapuram today.

He said, women are entering more challenging spheres of life and as a powerful force, women have shown their might to helping fight out the Covid-19 pandemic in the country.
Hailing Kerala’s women empowerment initiatives Mr. Ram Nath Kovind noted that of the 15 women the Constituent Assembly had, three were from Kerala.

He contended that women have always participated in the freedom struggle of the country starting from the 19th century.

He said that the Non-Cooperation Movement and Quit India movement have had remarkable participation by women under the able guidance of Gandhiji.

He spoke in length about the contribution made by Kasturba Gandhi, Sarojini Naidu and Kamala Devi Chattopadhyay.

He said that there are many inspiring women who have participated in the freedom movement and went on to speak of the contribution made by Bhikaji Cama and Lakshmi Saigal.

Susil Patra a Patient from Odisha Get Support From Narayana…

He spoke of the contribution of Hansaben Jivraj Mehta to the cause of women’s empowerment and how she taught the world the first lesson in gender equality.

He also said that India accomplished a rare distinction of offering a universal adult franchise to all its adult citizens including women. Women not only voted in elections but also contested and 24 of them were elected to the first Lok Sabha in 1952.

The two-day conference hosted by the Kerala Legislative Assembly is the first national event of this kind to be held in the country. It will have various sessions on themes vital to women legislators.

The President who arrived in Thiruvananthapuram yesterday on a two-day visit will leave for Pune this evening.