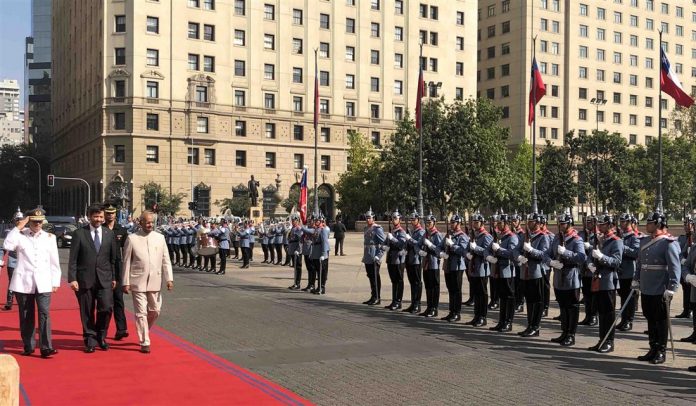 New Delhi: The President of India, Shri Ram NathKovind, reached Santiago, Chile in the evening of March 30, 2019 – the final leg of his visit to three nations – Croatia, Bolivia and Chile.

On March 31, 2019, the President visited the Pablo Neruda Museum in Santiago. He gifted a special pen to the Museum made by the family whom Gandhiji encouraged to develop the first indigenous fountain pen in India.

Yesterday (April 1, 2019), the President commenced his engagements with paying his respects at the Monumento Al Libertador General Bernardo O’ Higgins. Thereafter, he visited the ‘La Moneda’ Presidential Palace where he was received by Mr Sebastian Pinera, the President of Chile and accorded a ceremonial welcome.

Subsequently, the President led the delegation-level talks between the two sides. Speaking on the occasion, hesaid that India and Chile trade relations are doing well. But the two countries can do much more. Chile is the fifth largest trading partner of India in the Latin American region. Copper constitutes more than 85% of the imports from Chile. We must diversify our trade basket to further strengthen trade.

In a major boost to furthering bilateral ties, Chile announced that it will allow visa-free entry to Indian nationals holding a valid US Visa. The President welcomed Chile’s decision as a step that would promote both cultural and business ties.

The President also thanked Chile for its strong condemnation of the recent Pulwama Terror. The two countries agreed to work together to strengthen global response to defeat and destroy terrorism in all its forms and manifestations, and hold those responsible, accountable for their brutality against humanity.

India also offered training slots to Chilean armed forces in the premier defence institutions including for courses in mountain warfare and peacekeeping. The two countries also agreed to explore opportunities for other cooperation in the defense field including jointly manufacturing defense equipment under the Make in India program.

Following the delegation-level talks, the two Presidents witnessed the signing and exchange of three MoUs in the fields of mining, culture and disability. The President also issued a Press Statement on the occasion (attached).

In the subsequent engagement, the President addressed the India-Chile Business Roundtable in Santiago. Speaking on the occasion, he said that for India and for Indian business, Chile is not just a market; it is a very important and long-term partner country. Chile is India’s window to Latin America and to the Pacific Alliance. The President said that the two countries shall work together to expand their trade basket and open new pathways for economic engagement. We can cooperate in areas such as marine research and other scientific exploration, he said. India is also keen to strengthen its collaboration with Chile in the space sector.

The President said that in financial year 2017-18, India drew about US$ 62 billion in FDI and was recognised as among the world’s most attractive investment destinations. Given this, Chile’s modest investment in India is an anomaly. Since the beginning of the century, Chilean companies have invested just about US$ 150 million in India. This needs to be rectified.

He said that Chile’s two sovereign wealth funds have a reputation for sound investment decisions. They could consider opportunities in Indian infrastructure sector. Together we can design investment products that serve Chile’s Economic and Social Stabilisation Fund as well as its Pension Reserve Fund – and feed into the Indian growth story. This would lead to a win-win situation.

In his next engagement, the President attended a luncheon banquet hosted by President Pinera. Speaking on the occasion, the President said that our bilateral agenda is expansive. From energy to security, and from Yoga to Outer space, we have much work to do together. He wished that our warm and mutually beneficial friendship grow and prosper in tandem with the progress of both our peoples.

In the final engagement in Chile, the President addressed the students and faculty of the University of Chile on the topic ‘Gandhi for the Young’.

Speaking on the occasion, the President said that Mahatma Gandhi belonged to all cultures and he drew from all religions. While deeply rooted in Hinduism, Gandhiji was also influenced by Christianity, Buddhism, Jainism and Islam as also by thinkers such as Tolstoy, Ruskin and Thoreau. He thus came to represent the confluence of all that was best in the East and the West.

The President said that Mahatma Gandhi carried his concept of universal love to include living in harmony with nature. He advocated both sustainability and ecological sensitivity at a time when the industrial revolution and increasing mechanization were the mantra guiding the world. He promoted concepts which are now enshrined in the sustainable development goals adopted by the United Nations.

The President said that Gandhi was a unique persona who inspired both the East and the West, who forged new pathways for human endeavour, while at the same time maintaining the strength and sanctity of tradition and spiritual roots. To all those who are adrift today in a sea of doubt and scepticism, his life, thought and philosophy would inspire them to regain inner strength and confidence. Mahatma Gandhi was more than just a man, he was an ideology, an institution that still resonates more than a hundred years after it was developed.

In the evening (April 1, 2019), the President left for Cape Town on his way back to India. He will take the opportunity provided by the transit halt to address the Indian Community in Cape Town.